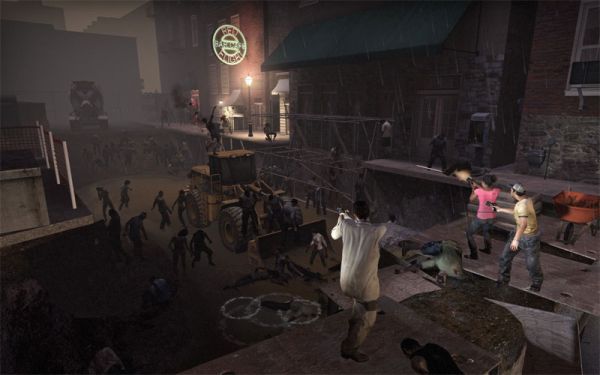 While gamers had to wait almost a year for their first taste of a new campaign for Left 4 Dead 1, with the second game the wait was half of that.  Left 4 Dead 2's The Passing has been talked up quite a bit, the campaign from the get go sounded like one designed for longtime fans of the series as our favorite characters from both games would finally come face to face.  Having played the three level campaign a handful of times now, we weigh in on whether or not the content is worth the price of admission  - which of course varies by platform from free on the PC, to $7 on the Xbox 360.

The Passing is set between the Dead Center and Dark Carnival campaigns, and follows the L4D2 survivors as they leave the stock car of a Mr. Jimmy Gibbs Jr to lower a bridge manned left of the L4D1 team, or what's left of it.  The levels themselves offer quite a variety of locales to visit, from city streets, to parks, winding buildings, and sewers to finally end up back where you started - the bridge.

One thing that will stick out at you immediately - this town was well defended.  Whether it's the new footlockers in which you'll find full of dozens Molotov and pipe bombs, or the special infected zombies of fallen survivors that carry health packs, pills and other items to use - it's easy to see these citizens were prepared for the zombie invasion, or at least they thought they were.

Speaking of the fallen survivors, these new zombies are a tricky bunch because they lure you INTO the zombie horde like a sexy lady into a group of muggers.  It's easy to see the candy they carry, and as soon as you catch site they run straight away from you.  It's tempting to go after them, but a lot of times it's ill-advised, and ends up in quite the mess.

Only two new weapons are added, one melee and one gun.  The Golf Club is the new melee weapon and provides a new achievement, though it really doesn't behave all that differently than the other items.  The M60 on the other hand is a machine gun that is capable of spraying lead for a full 60 seconds - without the ability to reload.  The gun is more than capable of turning the tide of battle. There's a few set pieces that are memorable as well in the three short levels.  Crashing the wedding in the first level - complete with tuxedo and dressed out zombies is one of them.  Meeting the bride witch near the end of it only adds to the tension and setting.  There's a lot of tie ins as well with other campaigns, including a few moments with music of the band The Midnight Riders from the Dark Carnival campaign.

The run through the sewers at the end of the 2nd level is another intense moment, one that's will remind you of Hard Rain.  It's dark, slow moving, and there's plenty of zombies that are itching to eat your brains.  By the end of it our team was literally in full out "scream" mode as we yelled for our friends to get to the safe house.  All I can say is  - thank Francis for adrenaline.

Finally you arrive at the bridge and meet the three Left 4 Dead survivors.  These folks provide laser sighted cover for your team as you fill up a generator to lower the bridge.  It'll remind you a bit of the first campaign's end while filling up the stock car, but the gas canisters are more strategically laid out, and the additional cover fire from your survivor cohorts add to the atmosphere.

In the end it's tough to say if it's worth dropping $7 on this.  While the promise of weekly mutators seem nice, I tend to think we'll see that geared more towards versus players.  The campaign is a bit longer than the previous game's Crash Course, and it does add a lot more than just "some levels."  PC players have a no brain decision to enjoy a finely tuned campaign for free, 360 owners might want to make sure they have some friends around for the ride.

If you're looking for someone to play with on the 360, don't forget to check out our Co-Op Night this Thursday!