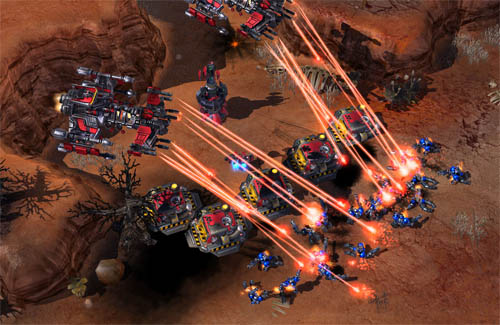 Well, well, well...look what we have here.   A release date, from Blizzard!  There are those that said this day would never come, but here it is.    Starcraft II: Wings of LIberty is set for an early summer release on July 27th.  Launching with the game is a completely revamped version of Blizzard's Battle.net service which includes friends lists, match making, achievements, cloud storage and more.

On the co-op front there's not much information in the press release, but the online comp stomping modes will be available, as well as co-op based achievements.  If you're looking to take the plunge, there's always the Collector's Edition of the game, it'll only cost you a cool 100 bills.

"We've been looking forward to revisiting the StarCraft universe for many years, and we're excited that the time for that is almost here," said Mike Morhaime, CEO and cofounder of Blizzard Entertainment. "Thanks to our beta testers, we're making great progress on the final stages of development, and we'll be ready to welcome players all over the world to StarCraft II and the new Battle.net® in just a few months."

StarCraft II: Wings of Liberty is the sequel to Blizzard Entertainment’s 1998 hit StarCraft, which has been hailed by players and critics worldwide as one of the top real-time strategy games of all time. Sporting a vibrant 3D-graphics engine, StarCraft II will once again center on the clash between the protoss, terrans, and zerg, with each side deploying legions of veteran, upgraded, and new unit types. Unparalleled online play for StarCraft II will be available through a new version of Battle.net, Blizzard Entertainment's world-renowned gaming service. Battle.net has been redesigned from the ground up to be the premier online gaming destination for Blizzard gamers, with several enhancements and new features, such as voice communication, cloud file storage, leagues and ladders, achievements, stat-tracking, and more.

The solo campaign for StarCraft II: Wings of Liberty will continue the epic saga where it left off inStarCraft: Brood War®. The story line chronicles the exploits of marshal-turned-rebel-leader Jim Raynor and features both familiar faces and new heroes. Players will be able to tailor the experience, choosing their own mission path and selecting technology and research upgrades to suit their playing style throughout the 29-mission campaign. Several challenge-mode mini-games will also be included, with focused goals designed to ease players into the basics of multiplayer strategies.

For more information on StarCraft II: Wings of Liberty, visit the official website at www.starcraft2.com. Further details about the game, including the alternative pricing options previously mentioned for certain regions, will be announced in the coming weeks. With multiple games in development, Blizzard Entertainment has numerous positions currently available -- visit www.blizzard.com/jobs for more information and to learn how to apply.