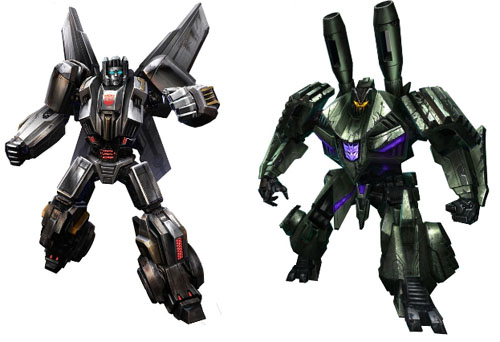 For those of you who haven't heard yet, two more characters have been announced for the upcoming Transformers game, Transformers: War for Cybertron: Autobot Silverbolt and Decepticon Brawl. We've already told you a little bit about the abilities of Warpath and Barricade as well as Ironhide and Skywarp. Here's what Silverbolt and Brawl have in store for us:

Description: SilverBolt is a Grim and brave warrior, who often worries more about his teammates then himself. He is courageous, can fly at break-neck speeds and truly believes in the Autobot cause.  He would die in defense of his friends if ever given the opportunity.

Description: Brawl is Megatron’s pet weapon of mass destruction.  He loves nothing more than ripping Autobots limb from limb.  He is obsessed with explosions and chaotic, unending combat.  He often times thrusts himself to the frontlines of battle at the risk of his own spark, not caring whether he lives or dies as long as he takes an Autobot with him.