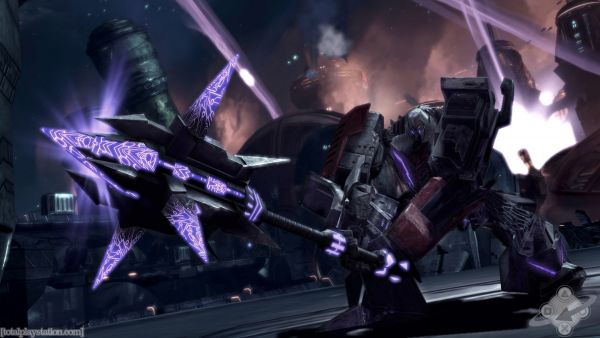 This week in co-op Marc and Kat experience what happens when two generations of geek collide in the wonderful worlds of Transformers: War for Cybertron and StarCraft II. Two vastly different worlds, very different games, with one thing in common: great co-op times to be had in the fictional worlds of long ago made new again.

It had taken him hours to fight his way to the ancient gladiatorial stadium at Kaon City.  Weary, and covered in bits of oozy slime, Optimus Prime transformed from his alt mode and looked around.  The skies above Cybertron were filled with monstrous shrieks and dark, flying forms.

In the distance, explosions rumbled as the war raged its way across his beloved planet.  Optimus entered the gate, and made his way through ruined stairs to the gladiatorial pit itself.  The walls and floor were littered with the parts of fallen Transformers, some rusted with age and some brand new.  The latter were slashed, scratched, crushed, and even pockmarked with acid.

His audio receptors registered a noise in the ruined upper deck of the stadium.  He drew his weapon and zoomed his optics in, scanning for any signs of the enemy.  From the shadows, Prime saw a glint of metal, and then his ancient foe, Megatron, stepped from the blackness.  The Decepticon leader laughed mirthlessly.  “Ah, Prime.  Your warrior’s instinct has been dulled after all these megacycles.  I had you in my sights more than long enough to extinguish your Spark forever.”  With a quick leap, Megatron transformed into alt mode, and navigated the steps, stopping in front of his Autobot nemesis and transforming yet again in a whirl of motion.

Warily, Optimus Prime lowered his gun.  “I’ve no doubt of you prowess in battle, Megatron, of that you can be certain.  But we have other matters to discuss right now.  These alien invaders are thriving off of the Dark Energon that you yourself unleashed.” Prime jabbed his finger at Megatron’s chest, and the Decepticon bristled.  “Not only have you caused our planet unimaginable harm, now you’ve attracted a foe so great even our combined efforts may not drive them back!” Before Megatron could respond, an eerie cry pierced the air, soon echoed by dozens more, and the two Transformers looked up.  In the air just above the stadium floor flew dozens of horrific, batwinged creatures.  The body of each was laced in an eerie purple glow, the effect of Dark Energon consumption.  Megatron lifted his ion cannon and blew a hole through the lead creature, while Optimus drew his blaster and blew apart the wings of a second.  As the creatures descended, each fired a volley of explosive shots, which bounced off their initial targets seeking more.  In the blink of an eye, Optimus and Megatron were pinned down behind a fallen wall of rubble.  “Starscream, where are your Seekers?” Megatron yelled in fury.

Suddenly, the roar of missiles filled the skies, and the stadium was rocked by a series of airborne explosions.  The alien flyers wailed in pain, ignoring the Transformers and moving to attack a new threat.  Luminous purple gore and charred bits of flesh fell like rain from the sky.  Within moments, the air was cleared, save for a group of snub-nosed, short winged aircraft hovered over Optimus Prime and Megatron.  Slowly, the wings of each craft folded in, and stout legs fell into place as landing jets fired briefly.  The strange flying machines had changed into another form, similar to the Cybertronians’ own.  One of the mechanized walkers moved noisily forward, halted, and a cockpit opened from the middle of its chest.  A grizzled, bearded human emerged, and deftly jumped out of the battleworn vehicle, followed by a large man in a battle suit. “Looks like you boys got yourselves a Mutalisk problem.  Sorry I’m late. Name's Jim,” Jim Raynor took a long draw off his cigar. “Don’t worry, I been in this situation many-a time before,” he reassured the nervous, yet gigantic inhabitants of Cybertron.  Jim stood by the nearest console, puffing away on his cigar and inputting commands. “I’ll loan you boys my Goliaths, and maybe a few turrets for them fliers,” Jim said, pausing just long enough to confirm his orders on the screen, “the ground units, well - all you can do is burn ‘em ‘till there’s nothin’ left.”

"It is good to meet you in person, Jim Raynor," Optimus Prime intoned.  Megatron said nothing, merely inclining his head at the human with an air of contempt.  "Though our race is accomplished in the ways of war, these Zerg, as you call them, are a threat unlike any we have seen before."  The Autobot leader took a step closer to Raynor and looked at the display screens before him.  "Dark Energon's effects are incredibly powerful on Cybertronian life, and upon the Zerg, as well, it would seem."

Watching the monitors, Jim took silent note of the Zerg breeds he saw: Hydralisks, Zerglings, Mutalisks, all the common breeds he expected.  But another Zerg mutation was here, something new.  Huge forms that outweighed any Zerg he’d ever encountered, they appeared to change forms quickly, adapting instantly to any threat . A sickening thought raced through Jim Raynor’s mind - had the Zerg learned how to infest the native Transformers?