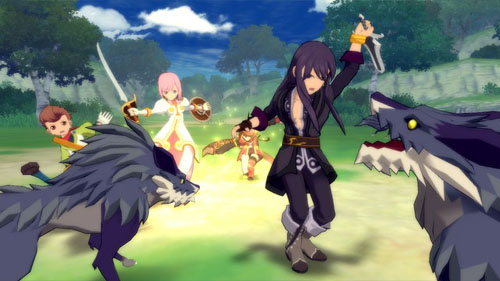 I have a love/hate relationship with JRPGs. We always start off on a good foot: I admire the often impressive graphics, delight over whatever crazy-complicated combat system it offers, thrill over opening the chests and equipping my characters. Ten (or twenty, or thirty) hours later, I can easily find myself cursing its random encounters, its stubborn adherence to save points (which often come few and far between), and its convoluted storyline that had ceased to make any sense and appears to never end. A reveal of some new system or gaining better understanding of some already existing gameplay element that was holding me back can soothe my rage and I can go back to enjoying it again or I drop the genre in disgust until the next shiny, plastic-wrapped box courtesy of Japan whispers promises that this one will be different. This isn't the pattern of all JRPGs I've played, but sadly, it's a common pattern.

Despite my complicated relationship with the genre, I still love to share the experience. Much to my dismay, though, there are not very many co-op JRPGs. Even less that support couch co-op, which is often my co-op of choice as I live with my main console co-op buddy. And of both the online and couch co-op breeds of JRPG, one's hard-pressed to find a complete co-op experience. Co-op is confined to battle segments, or has a separate online portion from the core single-player experience. The Tales series, published by Namco Bandai, is one of the few JRPG series that consistently offers (local) co-op. I recently finished Tales of Vesperia for the 360 with my boyfriend and we had a blast. Though he has less interest than me in JRPGs, the Tales games have been ones we've both enjoyed. Though they don't offer full-out co-op (only battles are co-op; navigation of the world and such are controlled by Player 1), the ability to go through fight after fight with another player (or players) at your side controlling the other characters immensely increased my enjoyment at the game. It's also nice to have someone you can turn to after a particularly confusing cut-scene and say: "Huh? What just happened?" or "Where are we supposed to go again?" It's not just about the gameplay (which is fun enough, to be sure), it's about feeling as if you're exploring a world or uncovering a story together with someone. It's about working together to be better than you could be on your own. That's what true co-op is to me, and JRPGs can satisfy this for me.

Even single-player JRPGs have done this for me in the past. We also played Final Fantasy XIII co-op style, each taking 5-10 minutes at a time at the controller with the other one calling out helpful suggestions in battle (e.g. "Hope's is going to die - heal him/her!" or "I think you're safe to use Relentless Attack, now"). We pondered the story events together and wondered which characters would make it to the end alive. We shared our disgust of certain characters' personalities with each other. The only thing that wasn't co-op about our experience with FFXIII was that we weren't actually controlling characters at the same time. I see it as a type of "spiritual" co-op, if you will. Some JRPGs lend themselves better to this spiritual co-op than others. Demon's Souls (which, don't get me wrong, I absolutely love despite its apparent determination to make me cry), a game which even offers a type of online co-op, can bore my couch co-op partner to tears if he tries to spectate for too long (I'll admit, if waiting for my character to sloooooooowly regen mana or health in a corner because I don't want to waste any items is boring for me, I can't imagine how much more boring it is for someone who's not even playing). Games that have more of a cinematic quality seem to work best. The story has to be at least moderately interesting and the combat should probably be fun to watch as well, so as to engage someone who's not actually playing the game.

While actual co-op play is almost always more preferable, the disappointing scarcity of true co-op titles in the JRPG department often leads me to seek out this spiritual co-op, to satisfy both my JRPG and cooperative-playstyle cravings. How do you guys feel about co-op in JRPGs? Or about creating a co-op-like experience with a single-player game?