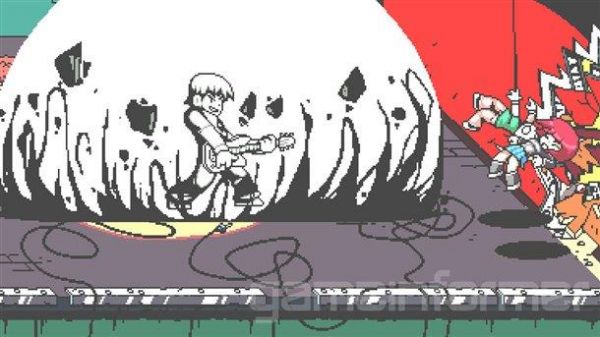 While my guitar gently destroys

If you are a PS3 owner, fan of cult sequential art (that's comic to you and me) Scott Pilgrim vs The World and lover of old school games, then rejoice over news that the game tie in of said comic is becoming a timed exclusive for PSN.  The lucky folks over at Gameinformer were able to get an early hands on with the game which looks like a Castle Crashers type beat 'em up for up to 4 players with added guitar battles.  Unfortunately, it is currently offline only, but with an announced date of August there may still be time to develop an online patch.

Gameinformer were limited to two of the four characters on offer, but were able to discover that each character had a different move set.  The storyline looks to be faithful to the original Bryan Lee O'Malley's comic series.  Even for people who don't know the series, the well created High Definition 8 bit style visuals should pique the interest of any fans of old school brawlers such as Final Fight or Double Dragon.  Check out a few more images over the page and Gameinformer's hands on preview.