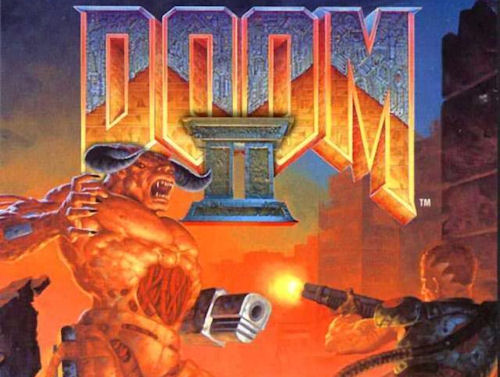 An interesting thing happened recently with the release of DOOM II on Xbox Live Arcade - not only did you get the classic game updated to be playable on the umpteenth platform with online play and the original graphics - you got a sense of the original experience of playing the game on a 14.4 modem!

You see, back in the day of PCs and the Internet, or lack there of, there was a time when everyone was rocking a 2400 baud modem.  You'd use this to dial up to local text based BBS systems, maybe download an image or two and some shareware and call it a night.  Games were mostly single player, but some games even allowed you to play with your friends across town using this dial up method.  But along the way came DOOM from id Software - a game that REQUIRED at least a 14400 baud modem to run multiplayer.

So one fateful day shortly after my 13th birthday I purchased a 14.4 modem at a local computer show, excited, I rushed home and called my best friend at the time -

So we fired it up and though we experienced it before in a local IPX/SPX Network setting, there was something exciting and almost science fiction about playing a game miles apart.

But there was a problem, despite running some fancy new dial up gear the game still wasn't 100% smooth.  As many times as I pressed the "Turbo" button on my 386DX computer it still didn't seem like the game was running as fast as it could.  I tried reducing the border size thinking it might help, no dice.

Yes my friends, it was my first experience with gaming lag - the year was 1993. You used to be able to adjust the screensize to get better performance by shrinking it.

We're now almost 20 years later and DOOM II has hit Xbox Live Arcade with online internet play.  My DSL connection is a 3Mbps connection - that's over 200 times faster than a 14.4 - and yet the lag is still there.  That's some authentic game play.

As much as I looked for the turbo button on my Xbox 360 it wasn't there to save me, just as it didn't save me in my 386 days.  Still we had a blast killing the cacodemons, the pinkies, the imps and shotgun dude.  We remember the levels well, shooting our way through and occasionally killing each other in laughable fashion.  We had high aspiration of completing the game in a single sitting, but that was until we hit a glitch in a level that somehow managed to double hit a switch - raising the platform hire than we could reach to end the level.

Despite the sloppy port and the online lag playing these re-releases reminds me of the gaming on the PC.  It was a time of  messing with autoexecs and config.sys files.  Do I add the himem.sys or not.  Extended memory or base?  Do I want to switch the IRQ or the DMA for my sound?  I'm pretty sure we spent just as much time getting the game to run as actually playing it.

Yes, despite my complaints about a sloppy port for some good ol co-op action with my childhood friend I'm reminded just how far we've come.