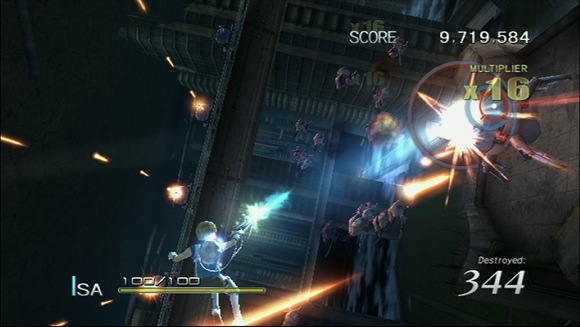 If there is any one thing the Wii does especially well, it's classic-style on rails shooters. Point the Wii remote at something on the screen, shoot, and the game takes care of the rest. Well, Sin and Punishment: Star Successor thinks you can do better than that. Originally released and well recieved in Japan last year, Star Successor adds an element of character control to your standard on rails shooter.

The pace of the game, combined with the challenge of maneuvering the character around obstacles in the environments makes Star Successor not for the faint of heart. Bosses lash out at you from any direction, enemies fly on screen at a nauseating pace, and you have to be on your toes to dodge and blast away at all times. Unlike most on rails shooters, you actually have a use for the Wii-Nunchuck. According to Joystiq's hands-on preview:

"Movement via the Nunchuck feels great, and it only took me a few moments to get accustomed to controlling Isa. I found it far easier to dodge and melee in this Wii sequel than in the original N64 game and I began feeling a rhythm: shooting at faraway enemies, while dodging towards other enemies for a quick melee kill."

Ah yes, did I mention this was a sequel? One of the few sequels that didn't feel the need to add a number to its title, the original Sin and Punishment was a Nintendo 64 game (also seen on the Wii Virtual Console), and was a bit clunkier. As with most on rails shooters, it just doesn't feel right without a light-gun style control. Both of the games were developed by the demanding "Treasure" developers. They definitely require you to use all of your available assets to move forward in the game. Co-op included. Co-op in this isn't quite perfect co-op, but it's certainly not the worst we've heard of. Your player two will control an on screen reticule, helping to blast the waves of enemies off the screen. The one difference between player one and player two is the character on screen. Player two won't have to dodge, or maneuver around the screen at all. This is odd because the story does have two characters. This is also a positive for people who wish to play with a less-skilled partner.

Generally speaking the game looks very unforgiving in pace and structure, but incredibly fun and original compared to most mellow on rails shooters. We'll know soon enough, with a release date sneaking up on us as soon as June 27th.