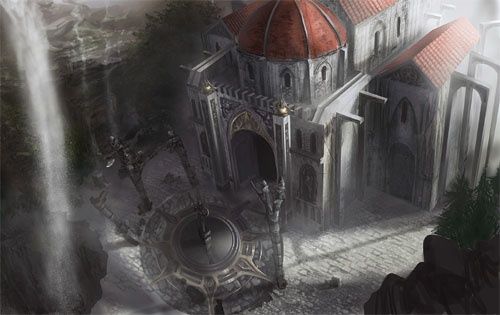 Following in the tradition of the dungeon crawler/action-RPG vein, with a bit of Gas Powered Games' own added flair, the Dungeon Siege series has provided quality gameplay and co-op experiences on the PC for some time and fans of the series have been eagerly awaiting Gas Powered to announce the next entry.  It came as some surprise, then, when the third game was announced as being developed by Obsidian Entertainment, a company best known for the Knights of the Old Republic sequel, the recent Alpha Protocol, and the upcoming Fallout: New Vegas game.  With a track record that's hit-or-miss, depending on with whom you talk, I went into the Dungeon Siege 3 demo a bit apprehensive, but left very eager to play.  Indeed, this may be the first co-op action-RPG I've seen that will be just as fun to play on a console as it will on a PC.

The first thing I noticed when we were ushered into the office room where Obsidian was showing off the game was how good the game looked.  From the dynamic lighting effects, to the smooth textures on the enemies, to the truly amazing vista views of distance towns, Dungeon Siege 3 is certainly one of the nicer looking action-RPGs I've seen.  The developers from Obsidian that were demoing the game told us that the game runs off a new engine, called the Onyx engine, that they've created explicitly for creating RPGs on the console and PC.  Based on the brief bit I saw yesterday, I'm hopeful we'll see it being used more in the future.

Graphics aside, the actual game play matched up with what I've come to expect from this kind of game.  Enemies appear and you hack/slash/magic them to death.  As this was a hands-off demo I didn't get to actually see how well the game controlled, but it certainly didn't look to involve an overly complex control scheme.  Additionally, combat doesn't seem to be as automated or macro heavy as earlier entries had been, so players worried that all they do is "set it and forget it" need not fear.  Additionally, inventory management, which is always one of the major hangups with a console RPG, won't be such a chore, according to Obsidian.  Not too much detail was given, but one little feature that they've added to help with this is the item display.  Whenever you stand next to item on the ground before picking it up, you'll see the name of the item, it's color (to indicate quality/rarity), and then it's sell value right below that so you can see right away how much it's worth and whether or not it would be worth picking it up to sell later. As far as character classes go, Obsidian showed off two of the classes in the game: the Guardian, your typical armored defender/two-handed attacker, and the Archon, which is another melee-based class but also wields some deadly fire spells for additional damage/mob control.  The developer joked with us about how every action-RPG/dungeon crawler title always says how they've got "totally unique character classes," but that they actually mean it.  From the talents, which weren't described but which we were told "were designed to work with one another," to the textures/animations themselves, Obsidian wanted a player to truly feel as if the class he or she picks is completely different than another one.

Speaking of working together, what would a dungeon crawler be without the ability to bring a buddy along?  Unfortunately, this is the one area where Obsidian was the most tight lipped.  During the demo, one of the devs joined and left the game at will (so local and drop-in/drop-out co-op is confirmed), but nothing was revealed about what other modes, i.e., online/sys link, would be available, how player progress is handled for all of the players, and so on.  The one assurance we were given is that co-op is very important to them, that they recognize that it needs to be a quality experience in a game like this, and that it is something they test and play with on a regular basis to make sure it's delivering on all of that.  All of which left me leaving the demo feeling very hopeful for the game, and eager to get my hands on it.