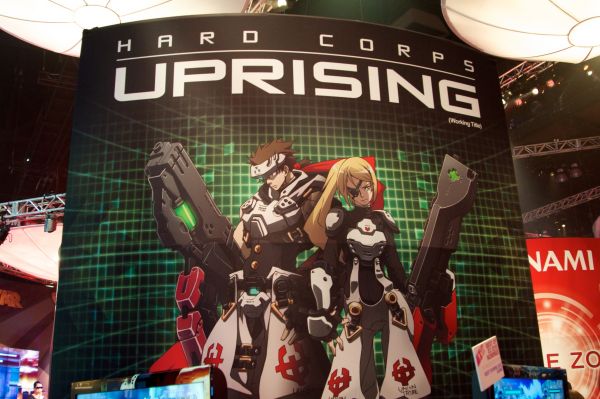 The spiritual successor to Contra: Hard Corps was available on the E3 show floor for some hands on time, and I was lucky enough to co-op through a few levels with the game's associate producer.

What immediately catches your eye with Hard Corps: Uprising is the beautiful hand drawn graphics.  Environements are richly detailed with plenty of depth and contrast to them with colors that pop off the screen.  The characters too are all hand drawn and when you combine them and see the game in motion it's truly something special.

The demo let us choose from two characters - though it's unclear if there's any advantage of choosing one over the other.  The game also supports drop-in and drop-out, so you can jump in anytime if need be.  The characters all have a sci-fi edge to them, wearing large body armor and posessing the ability to dash in mid air, as well as double jump.

The one nice thing about Hard Corps is the lack of one bullet kills, instead you and your enemies have health bars giving you a fighting chance without cheap deaths.  When you do get hit by a bullet you do lose your special weapon you may have acquired.  Besides weapons to pick up you can find health objects to restore your health along the way as well.

The level we tried out was through a desert with bright yellow sand and crisp blue skies.  Wave after wave of enemy soldier assaulted us, with a mix of traps and flying enemies attacking as us well.  About midway through the level we hit the first mini boss, a flying machine with a drill on the bottom.  He begane to drill into the sand causing a whirlpirl that would suck us in.  Remember, this is all hand drawn - so it's sucking in all these objects around it while huge mounds of sand are fluidly sinking into the ground.  It's very impressive. After taking him out we moved onto a vehicle section with motorbikes.  This is where I really started to grasp the aiming mechanic which allows you to move one way while shooting in another direction by holding one of the shoulder buttons.  The entire time we were chased by a robotic enemy from behind while facing off against lesser enemies from the front.

Finally we ended up at the real boss for the level - which again - had a pattern mechanic which was used to defeat him.  Another control option became apparent here as you could hold a trigger button to lock yourself to the ground and shoot at targets around you without jumping or moving.  This was extremely helpful in defeating the boss.

Overall I came away incredibly impressed with Hard Corps: Uprising.  It's been a long time since we've since a side scrolling shooter that looked this good - and plays this good.  The game is set to come out on Xbox Live Arcade later this year.