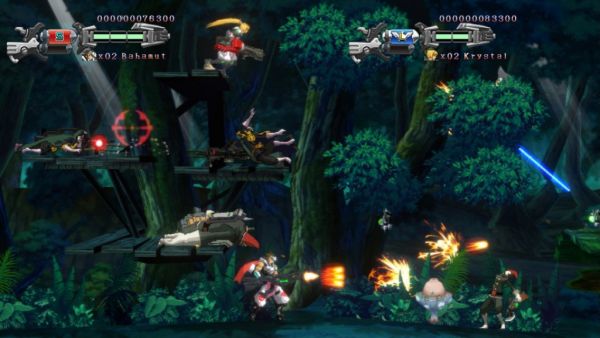 Note to self: Don't let the snipers stay alive next time.

Here’s the situation: take one fairly difficult game (Hard Corps: Uprising), one gamer who has been playing it and learning the ins and outs (me) and one gamer who had put a total of 20 minutes into it, then combine them all. What do you think would happen? Read on and find out!

So I’ve been playing Hard Corps: Uprising for the past few days (look forward to a review soon!), and wanted- no, needed to play it in co-op. Nothing beats an old-school shooter (well, maybe a side-scrolling beat-em-up) played in co-op, and the Contra series is the granddaddy of them all.  Nick, riddled with bronchitis, was glad to offer up some time to check it out with me.

First off, whoever invented the concept of stealing lives from a surviving player is either a madman or a genius. I’m not sure which, but there aren’t many things more satisfying than hopping back in on somebody else’s dime, that’s for sure. Using this metric, one can gauge that Nick had the most fun of anybody on Xbox Live that night.

I guided Nick around the levels, explaining where enemies would spawn and how to deal with their attacks, even showing off my newfound skills at reflecting bullets, and how pride always comes after the fall, when I was trying to show off by reflecting sniper shots. Hey, we can’t win all the time! Whenever Nick ran out of lives, he helpfully jumped back in by stealing one of mine. Like I said, he was having a lot of fun that night!

The moment of the night occurred when we reached the end of the second stage - we were out of lives, and Nick had just one hit remaining on his life bar. The stage boss, a Mega Man villain mashed up with Dr. Robotnik made short work of him. Luckily, I had fought him before, so I knew to dodge his opening attack.  The fight takes place in a multi-level jungle area with two pits containing robotic alligators whose jaws you can run across like a platform. It’s also quite wide, spanning several screen widths.

I spent a great deal of time dashing back and forth, tracking the boss, while damaging him as best I could. Nick was getting fairly bored watching me run back and forth, plinking the boss with a few shots here and there. After all, I had no lives for him to steal.  In any case, I managed to get the boss down to his last 10% of health, where he shifts strategies a bit and starts launching multiple hard-to-dodge aimed shots. In the frantic moments that followed, we took each other down to our last slivers of health. Just like in a movie, we dashed at each other and made our move! My shot felled the mighty boss! Yes!

Unfortunately for me, the boss also has two laser pods to make life more difficult for the player. In the split second after the boss was killed, I was shot from behind by a laser pod, earning us not victory, but a game over screen.

Mike is a pattern finding side scrolling shooter playing cyborg.

I watched more of this beautiful game than I played.  That’s ok, I was on mute and in fits of coughing for most of it.  Still, I rather enjoyed stealing all of his lives - especially the one when the boss had a sliver of health left and I came in to share in the victory...only to die 3 seconds later.