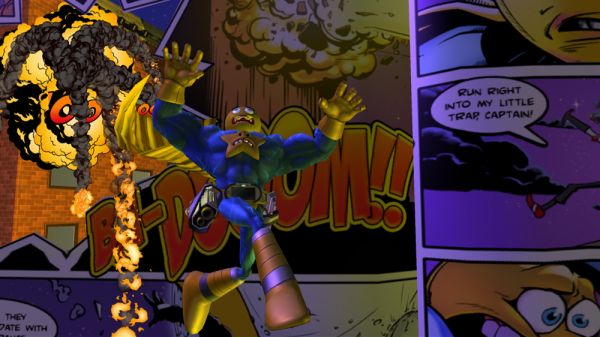 The last time we heard from the folks at Twisted Pixel Games about their upcoming title, Comic Jumper, was at PAX 2009 when they announced the new title, along with a patch to fix some of the on-line issues with their co-op friendly 'Splosion Man.  While they had a new trailer of the game at PAX East, we were able to get our hands on the game and give it a test run at this year's E3.  So, despite the lack of co-op in this title, what are our thoughts on Twisted Pixel's latest title?  In two words: pure enjoyment.

The premise behind Comic Jumper is that you assume the role of Capt. Smiley, a hero from a modern comic series that has seen better times.  In order to help boost his ratings, Capt. Smiley must jump from comic to comic and help the heroes of that series to solve their problems, thereby winning back his fans and getting his series back on the right track.  The Comic Jumper website has revealed the first three comic styles, the modern style that is Capt. Smiley's, a Frank Franzetta style inspired by the Conan comic series, and a style from the Silver Age of comics.  The fourth style, which hasn't been revealed on the site just yet but was shown at E3, is manga, with Capt. Smiley bearing a striking resemblance to a certain well-known RPG hero with blonde spikey hair and a large sword.  All four have a very strikingly different style when you see them in action, and it's amazing the amount of care and attention to detail Twist Pixel has taken to really capture the essence of each of these.  The story as well is full of humor and quirky moments, which seems to be a kind of trademark of Twister Pixel Games, with which fans of 'Splosion Man should be familiar.

As far as gameplay goes, Comic Jumper controls much like any good 2D platformer should, but with a slight twist (no pun intended).  Comic Jumper actually features a few different gameplay styles.  In some areas, Capt. Smiley is a brawler with our hero running forward and pummeling his foes.  In others, he pulls out his dual pistols and proceeds to shoot up any foes that impede his path.  In these cases, rather than just have a straight-forward run/jump/shoot without giving the player any real control of where Capt. Smiley's firing, players can use the right thumb stick to aim and the left and right triggers to jump and shoot, respectively.  This control style feels very natural in a modern age where twin-stick shooters are commonplace and allows players to focus more on dodging the multitude of bullets and enemies, at times, that are assaulting Capt. Smiley rather than worry about how to fight back.  The other play style that's been shown and revealed at this point is an on-rails shooter similar to Sin and Punishment.  While I wasn't able to play one of these sections myself, if it's been designed with the same level of care as the others, then I have no doubts it will be just as good. In addition to playing bits of the game, I had a chance to speak with Josh and Jay from Twisted Pixel Games about Comic Jumper and what else is on the horizon for them.  When asked why they chose these particular comic styles over all of the many and varied comic styles available to them, Josh and Jay said that they really wanted to have a good representative sample of all styles and chose four that would be very distinct from one another.  Additionally, when asked if other styles may become available via DLC, Josh Bear, Twisted Pixel's Chief Creative Officer, wasn't ruling anything out, but it was a definite scenario of wait and see what happens with the title when it is released (no official date has been set, yet).  Along those same lines, the possibility of having co-op included in any future DLC content is not entirely ruled out but, again, very dependent on a lot of factors lining up.  Finally, speaking of co-op, while there's nothing concrete, they have a lot of ideas for their next game and are looking at having it be a co-op title, which we love to hear and for which we certainly are hopeful.

From the style to the gameplay, Comic Jumper has been influenced and inspired by many different styles and games; from Jack Kirby and Gunstar Heroes to Sin and Punishment and Frank Franzetta.  The game is a loving tribute to many of the classic comics and game of our youth, and despite the lack of co-op, promises to be an excellent title to include in any game collection.