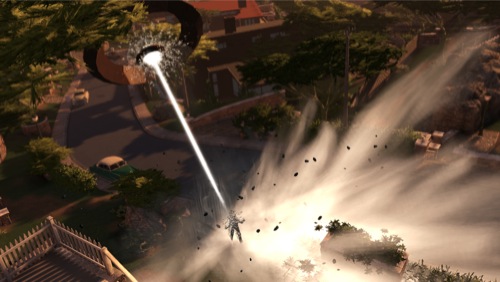 Whenever you take the name of a popular franchise and then shape it to be that of your own, the controversy surrounding it usually speaks louder than the game itself.  It's a shame really because this is the field that XCOM has sowed as it's a first person shooter based on a classic PC turn based strategy franchise.

Our demo took place in a white room set up to look like a traditional 1950's style suburban kitchen.  It's no coincidence the game itself will take place in an iconic 1950's world as you take the role of an XCOM agent investigating and fighting the unknown.  The team at 2K Marin are fans of the original series and their homage to the strategy element of the game takes place in your home base.

While here you'll be able to research and upgrade weapons, decide which missions to take and build your team for the missions themselves.  Right now you'll see a map of the United States with current active missions - each mission will yield you a different reward - but playing certain missions may cause you to miss another one.

The missions themselves play out in first person and while you may have some information going into the mission, you'll need to keep an eye on your surroundings to adapt and gather information for future missions.  Like the first Bioshock taking pictures of aliens, objects, and other elements left behind by our creatures of the unknown will yield you rewards to increase your arsenal. The mission we saw had the XCOM team answering the call of a lady in distress in a suburb in an American suburb.  The game itself is looking beautiful, there's a clean and crisp style to the graphics with a color palette that fits perfectly with the theme.  As our agents walked through the neighborhood it was easy to see something was off, trails of black slime and the lack of any human life, gave a hidden warning to what was ahead.

Suddenly we heard a man scream.

Out of the house next to us he crashed through a door and fell to his knees, covered in so much black goo that he choked to death on it.  As we made our way to the house of the distress call the woman began to scream for help, but before we could make our way up the steps we were attacked by the blob like aliens.  A firefight ensued and the house was ripped to shreds.  One weapon that was particularly effective was one that was researched from a previous mission - the Blobotov.  This grenade made short work of the black buddies and soon we were up stairs saving the woman from certain doom.

But it wasn't over yet - we had to escape with our life.  That's when some giant energy like alien appeared in the sky, shooting a powerful energy beam that destroyed everything in it's path.

The XCOM team hoped to convey not only the fear of the original series, but the strategy and tension it created.  While the team wasn't talking multiplayer details, there does appear to be some cooperative elements, and the producer giving the demo did explicitly say they were looking at co-op options.

There's a lot of promise in XCOM - and if people can look past the name - we may have another solid shooter hybrid from a 2K studio.