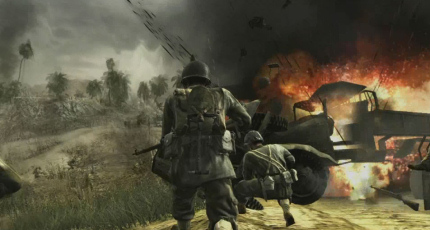 IGN has posted their impressions from some hands-on time with Call of Duty: World at War.  As we reported to you earlier this summer, the fifth Call of Duty title will feature co-op play, for the first time in the series.  The WWII-themed title will let players drive vehicles and work together as a squad, teaming up to achieve objectives.  However, there is an interesting twist to the co-op play that is referred to as "competitive co-op".  This feature adds individual scoring to the game; at the end of each round, the winner is the one who has accumulated the most points for kills, head shots, etc.  This little snippet from the article is particularly interesting:

The kicker is that in competitive co-op, if you die, you lose points, and if someone revives you, they earn points. That mechanic is designed to reign in players, because if you charge ahead or take a lot of risks or play wildly and get killed, you lose points. Meanwhile, your rivals gain points for reviving your sorry rear, so you're basically giving your competition points by dying.

While you are competing with your teammates to earn points, you are rewarded for helping each other out, as well.  Beyond the warm fuzzy feeling you get for assisting your buddy, you will also earn the more tangible incentive of a higher score.  Competitive co-op is certainly a good name for this, isn't it?  It should be interesting to see how this plays out once the game is released on Xbox 360, PS3, PC, and Wii later this year.

Thanks to "txshurricane" for the tip.