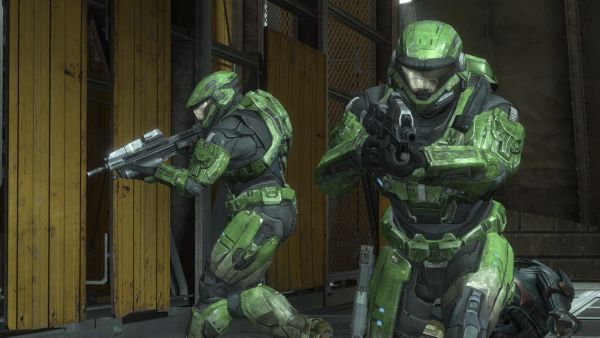 Halo: Reach's competitive multiplayer will undoubtedly be where the truckloads of character XP (called "Credits") are at. It will also be where the truckloads of whining, singing, griefing, elitist turds are at. So imagine our tears of joy when the MTV Multiplayer blog snagged a few new details outlining how Credits and customization is handled in Firefight 2.0 - and how they're both to our benefit.

Lars Bakken, our new favorite co-op lead designer, described a custom game mode that the game testers have come up with - and how Credits are still dispensed when players tinker with the rules and settings. On top of that, Daily Challenges will be issued specifically for Firefight - extra Credits can be earned by completing these.

"The testers have started doing this thing where they give themselves invulnerability, unlimited weapons, bottomless clip, unlimited armor abilities, so they can give themselves jet pack and stay in the air infinitely and rain down unlimited rockets. Then they ramp up the AI to an insane degree, but since they're invulnerable, they don't die, but the AI are doing incredible things trying to kill them."

According to Lars, Credits are still awarded in these types of scenarios, albeit to a lesser degree. In essence, there's really nothing you can do in Halo: Reach that doesn't somehow reflect back to your persistent character.

"We don't want it to be that players sit there, make the easiest mode, and earn a bunch of credits. They'll be able to do that, but they'll earn maybe a tenth of what they would in matchmaking."

He also gave a quick idea of what the Daily Challenges would entail:

Bakken gives an example of one where getting 50 headshots on grunts in Firefight matchmaking will result in the player earning 2,000 credits.

Color me excited beyond excitement. The co-op support in this game is shaping up to be outstanding. Creating your own Firefight rules and fighting alongside your friends in customizable has me in fits.