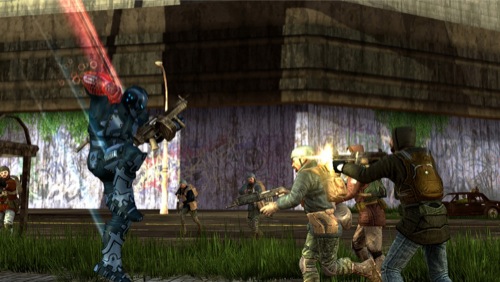 Crackdown 2 took 2009's E3 by surprise storm, and was even playable at PAX East, 2010. How does something turn from announcement, to release in almost one year? Loads of hectic crunch time. Kind of like facing a horde of Freaks by yourself. Good thing Ruffian had a good team together, because they really hit the nail on the head with Crackdown 2.

How would one measure an average game cycle? Well, if we take a look at high profile game Starcraft 2: Wings of Liberty or Halo 2, which faced many delays since their announcements, a year or so of development is really not much.

According to MTV, Ruffian Studios, established in 2008, only had about 18 months of total development time for Crackdown 2. The development process includes a lot of steps, including concept, design, writing, voice acting, and finally coding. We're not sure all the little steps in between, but 18 months is really not much to come up with an idea and present it to the people.

The final project time, working out all the kinks, programming all the little stuff - that was only allowed about 8 months of crunch time to get it to us on time. For many developers, this means we're left with a really crummy game, but Ruffian really pulled it together, and according to the producer James Cope, it was difficult.

The last 8 months have been solid crunch. It was hell, but the end result was really good. We're really pleased with what we've done. We set ourselves some pretty aggressive, ambitious targets, and we've been very lucky. With some great guys and some hard work we've come up with something we're all very proud of.

Not only did they increase the multiplayer options by giving us a true versus mode, they added two players to the co-op, increased the scale of the battles (How many of us have already plowed over 20 or more Freaks at a time?), cleaned up menus and most gameplay issues, all while keeping the original feel of Crackdown.

As a co-op website, we collectively really, really liked Crackdown 2, and I for one was surprised to hear the limited crunch time they had to finish such a gem of a game. Fans of the original love it, and hopefully we'll get some more to join us in the expanded Pacific City.