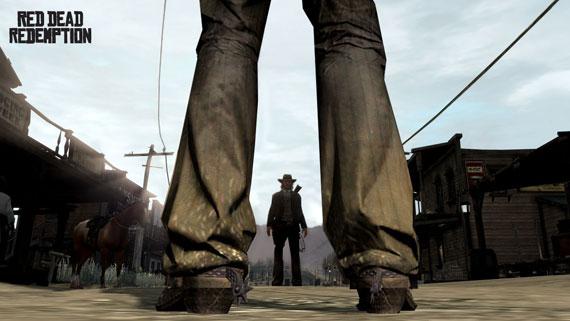 Tiny John Marston did not enjoy the view from above

In a perfect online world, the Free Roam aspects of Read Dead Redemption would be a place of harmony and the cooperative gameplay that we at Co-Optimus adore.  However, this is not always the case, especially if you enter a public match.  You are likely to find one or two apparently sociopathic cowboys running around shooting everybody and perhaps picking on a certain player.  The concept of playing online to ruin the experiences of others is well known in the gaming community and these players are known as 'Griefers', a concept that an upcoming Red Dead patch from Rockstar should stop.

News is a little light at the moment, but Rockstar have stated that they are working on counter measures to tackle the few "rotten apples".  This will include banning gamers who have been cheating, what constitutes cheating is not yet known, but perhaps the warning will be enough to put most gamers on their best behavior.

The new patch is set to be released on both PS3 and 360 in the next few weeks and also includes the ability for an abused player to transport away from a problem cowboy/cowgirl.  Perhaps more in keeping with the Red Dead universe is the other update that will see any player with a kill streak of six or more become 'most wanted' and the AI law enforcement will be sent out to bring 'em to justice.

Hopefully, these new game elements will make the online experience more enjoyable for co-op fans, but still allow boisterous players to unleash their anarchic best.  Finding solutions to griefing that fit into the universe is always the best way to seamlessly solve a problem.  What would you do to improve Red Dead Redemption's Free Roam mode?