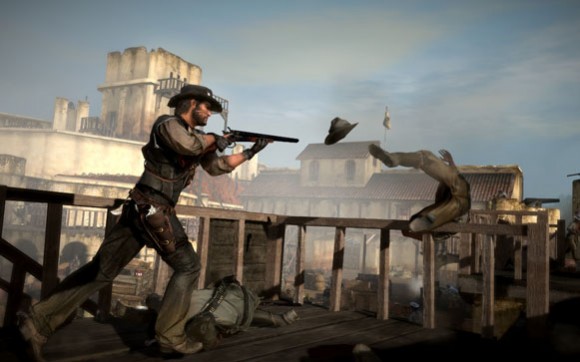 Rockstar's latest open-world epic, Red Dead Redemption, has certainly taken the gaming world by storm with its merging of an incredible Western story and feel with the usual GTA mechanics.  While the co-op elements that came with the game's initial release may not be all for which we were hoping, we take solace in the fact that before the game ever came out, Rockstar promised to release additional co-op missions for the Free Roam mode as free DLC later this month.  Now, it seems like that may not be all of the co-op DLC Rockstar has planned.  The development studio recently answered a few frequently asked questions they received, and one of those questions was centered on whether or not more co-op opportunities would be forthcoming.

We’ve announced the Outlaws to the End (free) Co-Op DLC Pack, which you should expect sometime in June.  We’ll have more details on that pack specifically very soon. Look for some screens unveiling one of the other missions in that pack very soon.  But also know that there will definitely be more DLC packs to follow, later this summer and into the fall.  Some exciting things are planned – we’ll be announcing info including release time frames and pricing on those in the coming months.

Not much to go on, we'll grant you, but it certainly seems to be a promising start; especially when you consider that the first DLC released by Rockstar for Red Dead Redemption is the free co-op mission pack instead of additional multiplayer only modes.  The devs go on to answer a question about connectivity issues in the Free Roam mode and state that they are:

right now working round the clock on a title update for both Xbox 360 and PS3 that will address the main persisting issues, including [the connectivity issues].  We’re aiming to have this ready and live for download within the next few days.  We thank you for your patience.

So there's some more good news for all of us that have experienced problems with connecting and/or randomly dropping from Free Roam sessions, which hopefully won't plague us too much during our XBox LIVE Co-Op Night this Thursday. For those of you that own the PS3 version of the game, you may have noticed a new patch was released for the title in anticipation of the "Outlaws to the End" DLC pack.  This patch included a list of all the trophies that will come with the DLC when it's released.  Those of you who don't want to spoil the surprise can hitch your horses here and head into the saloon.