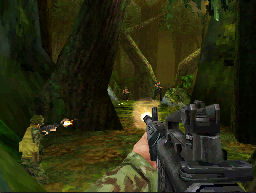 That tiny screen above is what you'll be looking at if you decide to pick up Call of Duty: Black Ops for the Nintendo DS.  Of course, if you have the DSi XL it'll be much bigger.  That being said, Activision has announced a DS port of Black Ops which includes missions inspired by its big brother on the console.  You'll even be able to take control of vehicles like jets and helicopters.

Best of all the game will include a two player co-op mode along with a six player versus and an arcade challenge mode.  The game is being developed by n-Space, who created the Wii and DS versions of Marvel Ultimate Alliance 2 and the previous Call of Duty Modern Warfare game on the DS.

Details are still sketchy on exactly what the co-op entails, but there's a short interview at IGN with some more information on the game.  For now enjoy a handful of screenshots from the game.