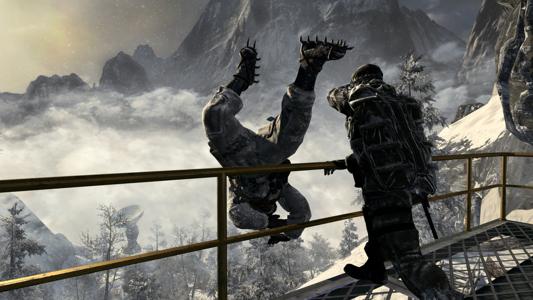 Call of Duty: Black Ops has been patched for the PS3.  Again.  As we reported last week, the latest patch had a crippling effect on the PS3 COD: BO community.  Connectivity issues having to do with open, closed, and moderate NAT plagued online players.  Treyarch posted this statement on their official forums:

Treyarch is dedicated to ensuring the best gaming experience for the fans, and we've been actively working with you to continue to improve the game based on your feedback. As always, keep the feedback coming through the community forums.

So they don't hate PS3 owners, as I have previously asserted.  Apparently they realized that if they didn't have PS3 sales, they would be stuck with Halo money, and then they may as well throw themselves out a window. (Thank you, Chris Rock) So what exactly does the new patch do?

Enabled mute functionality in Playercards in the pre-game lobby

Oh.  UPnP means "universal plug and play".  I thought it was "under-pants in prison".  Well, I have to be going now, because I think I may have given a friend some really bad advice.  Until next time.