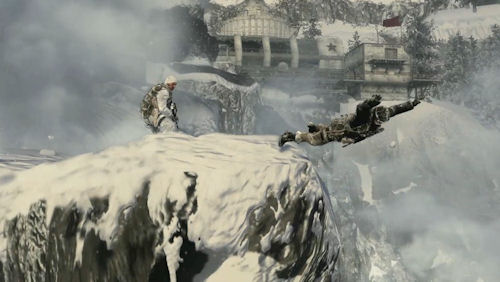 Call of Duty: Black Ops may not be launching till next week, on November 9th, but we're still getting the official launch trailer today.  The trailer was shown last night during Sunday Night Football but now you'll have the pleasure of watching it over and over again.  The music throughout is the Rolling Stones' "Gimme Shelter" - no doubt chosen in part for the time period the game is set during.

While the trailer is explosive in every definition of the word - there's no co-op zombie mode to be seen in it.  They probably had to cut the zombie footage because Al Michaels is afraid of the undead, despite working with John Madden all those years.  BOOM!

In other CoD news - just got a tip concerning the game's co-op capabilities and the number of players.  Here's the skinny:

LOCAL
- 4-player splitscreen local multiplayer. All modes, weapons, attachments, perks, killstreaks etc are unlocked from the start for every player, no need to unlock for every profile. (versus)
- 2-player splitscreen Zombie mode. Defend against waves, you know the drill.
SYSTEM LINK
- 2-per-console system link multiplayer, unsure about total number of players.
- 2-per-console Zombie mode, unsure about total number of players.
Also when you press system link the game tells you about requiring the same update as the console(s) you are linking too and that you should go onto Live to get the latest update.