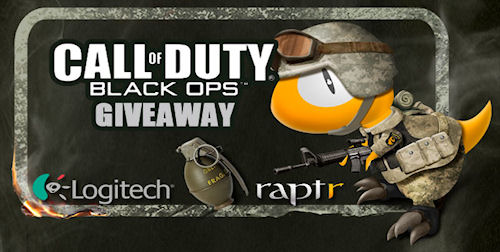 This week is arguably one of the biggest video game releases of the year with Activision and Treyarch's Call of Duty: Black Ops hitting the Xbox 360, PlayStation 3 and PC on November 9th.  We've been covering the game for ages and have given you every morsel of goodness we could muster from it.  We've covered the 6 player combat training co-op mode and we've covered the four player zombie survival mode.  We've even covered the mode that Activision apparently doesn't want us to see - the co-op Dead Ops mode.  We know you're excited for the game, we know you're going to play the heck out of the game, so why not enter a contest for a chance to win prizes JUST FOR PLAYING THE GAME.

Co-Optimus is joining up with popular game tracking service Raptr to complete such a task - and the contest is a huge one with over $5000 in prizes.  This contest is valid for anyone in the US and Canada (Quebec excluded) and will work on the Xbox 360 and PC versions - sadly Sony doesn't allow Raptr to track PS3 hours played.

The contest itself is a form of co-op - cumulative time playing for the Raptr and Co-Optimus community is tallied up and at certain levels new prizes unlock.  For instance - once the total amount of hours playing Call of Duty: Black Ops reaches 3 million hours - you'll be entered for a chance to win a custom PC gaming rig from Alienware.  You'll also be entered to win prizes once you've individually accumulated a certain amount of hours.

This is playtime is for ALL game modes including single player, online versus, and co-op!

Ok - so now here's where it gets good. The Co-Optimus community gets their crack at an exclusive prize pack once we there is one million hours triggered.  The prize is a Logitech Gamepad F310 and Wireless Gaming Mouse G700 with a total value around $125.  Just reply to this thread after entering the contest to be automatically entered to win that prize!

Again - to enter the contest head right here, sign up for a free Raptr account if you don't have one, and click Enter the Contest.  The contest ends November 21st so you and the community have a little less than two weeks to get 3 million or more hours.

Raptr ( http://raptr.com ) is a free service for gamers that tracks gaming activity for Xbox 360, PS3, and PC. Raptr also makes it easy for gamers to compare their stats, see what their friends are playing, and chat with their friends. Millions of users currently use Raptr to connect with popular social media and IM services like Facebook, Twitter, AIM, Live Messenger, Yahoo! Messenger, ICQ, Steam, Xfire, and Facebook Chat.