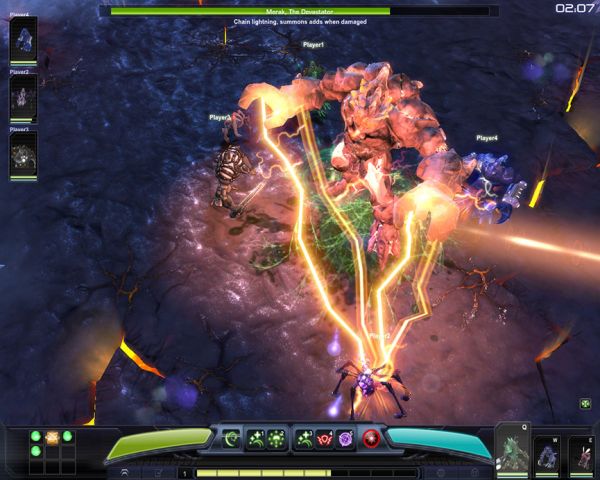 Fantasy RPG Hack n’ Slash dungeon crawler Darkspore is getting a bit of the curtains drawn on the gameplay, co-op, and unique elements that we should enjoy playing. Gamespot got a little hands-on time with the game, and they give us a lot to look forward to.

The controls are really easy, and if you are at all familiar with hack-and-slash PC games, then this should be a no-brainer. To move your creature, you left click anywhere on the ground and attack by pointing and clicking vigorously on an enemy. Numerical hotkeys are lined up for you to use your special abilities, which are unique to each creature.

The creatures/characters you control will somewhat resemble the creatures created from the PC game Spore where you build your own ecosystems, races, etc. To be clear though, the game is not a sequel in any way. Maxis wants us to try something new, and they’ve got just the thing. The co-op balance seems to be more pronounced than I’ve personally seen with any hack and slash, so working together is going to be huge here.

Our squad was like a balanced variety pack. We had one creature with long strong limbs that was a powerful melee fighter, a multiple-legged creature that was fast and nimble, and to round out the party, a flying buglike member that attacked from a distance. This came in handy when we faced the boss, which would constantly summon little critters that left a trail of flames in their wake. It was crucial to work together with the other players because the boss had a tendency to send its lasers after one person.

We’re not expecting to see Darkspore before 2011, but what we’re seeing so far is looking very promising. Hopefully we’ll get a bit more information before too long. In the meantime, enjoy these beautiful screens and this teaser trailer - they’re looking pretty sweet.