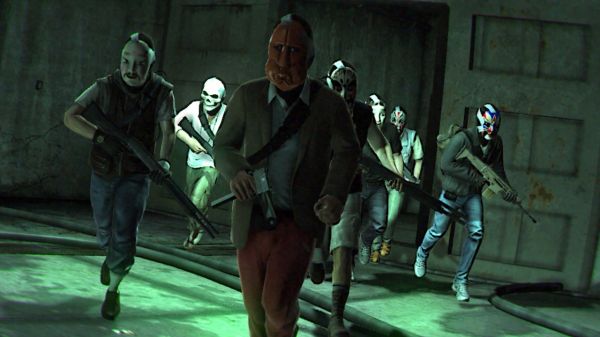 The first batch of DLC is out now for Kane and Lynch 2: Dog Days.  Packed in its loot bag is a ton of goodies including maps, weapons, and masks for your co-op multiplayer experience.  Previously most of this content was available as exclusive pre-order bonuses.  The good news is this should add quite a bit of content to both Kane and Lynch 2's arcade mode and multiplayer online modes.  The bad news is there's $11 worth of DLC here.

Take on new heists and unlock new Achievement points with two never before seen maps and five exclusive weapons for Multiplayer and Arcade modes.  Dockyard and High Rise maps, plus the Radio Tower map (previously available through pre-order offers) provide new opportunity to increase your wealth. And with the inclusion of five new weapons, including the DD 33, KL Viper, RTS, SMi 69, and the TOQ Model Four S the odds are in your favor of pulling off a successful heist.

Conceal your identity and avoid revenge attacks with 8 costume masks stolen from a Chinese gift shop, for all Multiplayer modes and Arcade mode. You never want to be identified, especially if you are a traitor! (Masks previously available through pre-order).