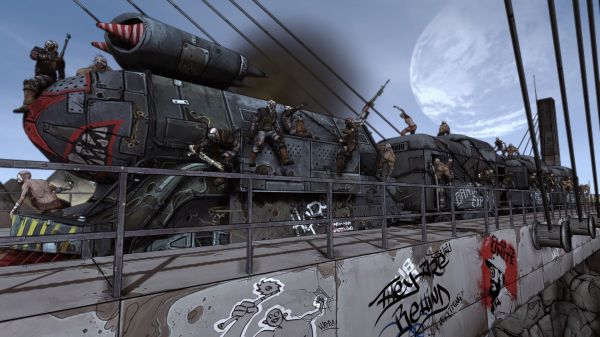 I'm just dancing over these new screenshots from the upcoming DLC for Borderlands.  Called Claptrap's New Robot Revolution the content will not only add dozens of new quests, a splattering of new robot hybrid enemies, and of course - plenty of co-op action - it'll feature the only robotic ninja assassin Claptrap in the galaxy.

Along with the screens we have a few promotional posters as well, rallying robots to Claptrap's cause.  They look...strangely familiar....

In other Borderlands news, once the DLC does hit a free patch will go out for the game that will rebalance existing content and increase the level cap.  This patch will be for ALL Borderlands players, not just those who have purchased DLC.  Just how far is the level cap increasing?

According to studio head Randy Pitchford 10 levels seemed too many, but 5 levels seemed to small.  With the current cap at level 61 there was only one number that made sense.  Yes boys and girls - an 8 level increase.