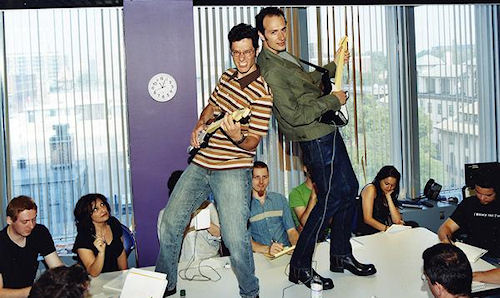 It was only a little over a month ago when we told you that Harmonix's parent company, Viacom, was putting the developer up for sale after only owning them for a few years.  Rock Band 3 sales numbers were partially to blame for this, but the $179 million dollar selling price surely contributed.

Rumors speculated that EA or even Activision would purchase the development house that created the Guitar Hero and Rock Band franchise.  But today comes word that none other than Harmonix itself has purchased the rights to itself from Viacom making them an independent developer once again.

The new company is actually a joint venture of an investment firm named Columbus Nova.  While the terms of the sale were not officially disclosed yet, we imagine that Harmonix got quite the deal on itself.

The good news is this does not affect any past or future DLC for the Rock Band or Dance Central franchise.  Word from the official Rock Band forums allows us to sleep easy at night:

"the DLC schedule marches on for Rock Band, we will continue our support of previously released titles,  and we're hard at work on some unannounced projects that we think you're going to be pumped about."

We're glad to see Harmonix land on their feet - I for one hope they dabble in the realm of smaller, downloadable music focused games first.