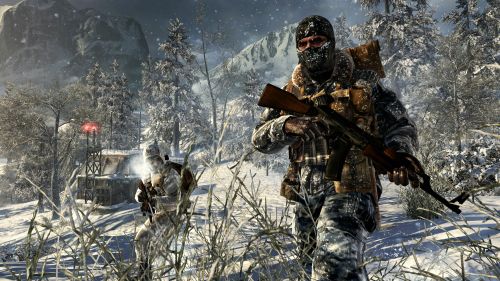 It just so happens that a certain game is in stores today, one that promises to be the be-all, end-all for co-op support. We're talking splitscreen...online...splitscreen online...matchmaking...persistent stats...you name it. Another goliath franchise - a direct competitor, in fact - drops its latest version into laps everywhere starting on November 9th, and it's making some interesting trades.

Call of Duty: Black Ops murmurings today have officially destroyed any hope for a co-op campaign. After Call of Duty: World at War's decent co-op support, this comes as a big disappointment. However, along with this downer comes news that what modes there are will support splitscreen online for two players, not only in the Combat Training bot matches, but also in competitive multiplayer and at least one mode yet to be announced.

This - along with an update on one of our original source articles - also seems to confirm that Combat Training will be online as well as splitscreen. It's not so much a shock as it is a nice surprise. Call of Duty 3 featured splitscreen online multiplayer, which Infinity Ward quickly dismissed and overshadowed with the first Modern Warfare. When Treyarch returned to helm World at War, splitscreen was back, but only allowed two players to tackle zombies and the campaign offline (as opposed to four players online). Although splitscreen in Black Ops will still be limited to two players...now the both of you can invite two more online buddies to help.

EDIT: A tweet from Treyarch CM Josh Olin advises that splitscreen online will not be included in the Zombies mode. Thanks to Nassassin for the tip.

I see this as positive news in light of how the Call of Duty franchise has been handled so far, but this could backfire for Xbox 360 owners. As yet, there is no mention whether or not having a second local player will require having a second Xbox Live Gold account. Hopefully guests will be allowed, as well as Live accounts for players who wish to save their progress.

I don't think Treyarch is finished surprising us, though. World at War's incredibly fun Nazi Zombie mode was announced less than three weeks before release, so there's still time for another Black Ops co-op bombshell to drop...and Treyarch community manager Josh Olin is teasing it today on Twitter.

If you're a co-op shooter fan, Black Ops is one to watch. Even though the lack of co-op in the campaign stings, don't write it off just yet.