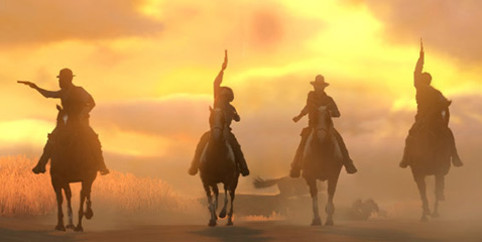 The third downloadable content pack for Red Dead Redemption is riding into town on September 21st, and it's bringing with it a whole caravan of great updates to the popular online Free Roam mode. The list price is $9.99 (US) on the PlayStation Network, and 800

on the Xbox Live Marketplace.

Today's trailer shows off these gameplay additions, which we've pared down to the seven most intriguing aspects of the pack.

Reason #1: He cheated at poker.

One of the biggest let-downs in Red Dead was the lack of any gambling games in Free Roam. With this new pack you can play Texas Hold 'Em Poker and Liars' Dice. If the cheating mechanic transfers over to multiplayer, there are going to be some interesting showdowns.

Four new hunting grounds will appear on the map for players who want to hunt bear, cougars, wolf packs, and wild hogs. Because nothing says "what a magnificent animal" like gangbanging it with shotguns from horseback.

Reason #3: You really need to win this race.

Horse racing finally comes to Free Roam, and if you need an unfair advantage, a steady aim and a Schofield .44 will increase your chances to win. This is for those of you who still ride the burro.

Reason #4: There is only one John Marston.

Liars and Cheats unlocks several main characters from the Red Dead campaign, including Seth, Irish, Nigel West Dickens, and John Marston. Should you come across another scoundrel bearing the lead character, you are obliged to shoot him dead. There just ain't enough room in this town for the two of you, pilgrim.

Reason #5: Someone has to protect the safecracker.

A new team-based competitve mode will join the previous, all of which are accessible from Free Roam and will automatically drag your posse in with you. This mode is called Stronghold, and it consists of several attack-and-defend scenarios - including robbing safes and infiltrating forts protected by cannons.

Reason #6: These bandits aren't going to kill themselves.

In addition to the previous six gang hideouts, Liars and Cheats adds seven more. These hideouts are good for loads of experience points (XP), and are probably Free Roam's biggest draw for posse riders. Storming a hideout never gets old; just try not to catch too many whores on fire.

Although you can't bring it into the co-op missions or versus modes, anyone who purchases this pack gets a rifle that shoots explosive rounds. Watch the trailer below to see it in action against attacking posse members, and to see a cougar get gibbed. Oh, yeah.