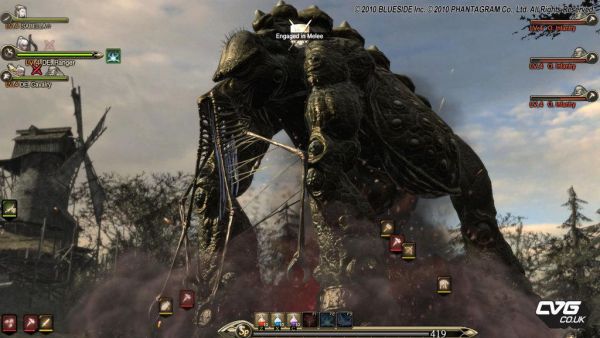 Would you look at that.  A working windmill.

Don't let the naysayers influence you when they suggest that too many cooks spoil the broth.  We at Co-Optimus believe the more the merrier, especially if up to 15 people at once can work together to take on an army of zombie elephants.  This is exactly what Kingdom Under Fire 2 is providing when it is released for the 360 and PC.

A set of new images were revealed at the recent Tokyo Games Show, courtesy of CVG, hinting at some frantic in game action.  Perhaps the on screen goings on will be too action heavy, because the images are suggesting a slightly overcrowded battle.  The game originally slipped from an early to late 2010 release, and is now slated for 2011.  Hopefully the time will be well spent, making the game a true sequel to first Kingdom Under Fire (and not contain the wobbly fleshmen of  Kingdom Under Fire: Circle of Doom).