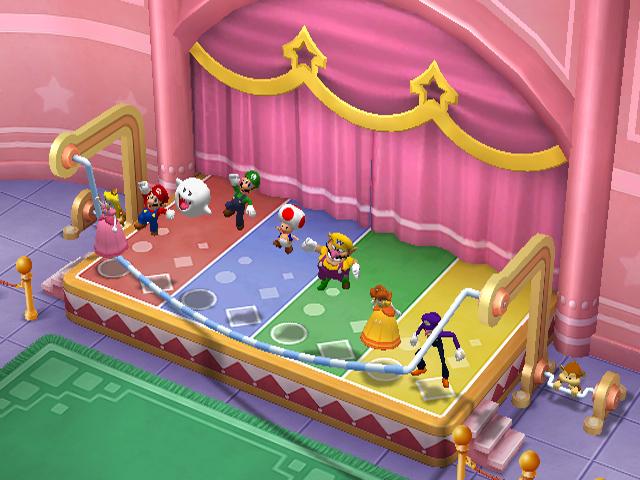 Everyone loves a good party. Some people call a party different things, but the basic idea is the same. You get together with some friends and kick back and chill. Well, apparently even video game characters know how to throw a party, as the Mario Party series has been going on for some time. So this week, my roommate and I decided to have some fun with Mario Party 7.

I always associate Mario Party with the good old days of gaming. Maybe it's because I spent my formative gaming years in the Nintendo 64 days (sad but true), and I lived in the days of Goldeneye and Mario Party. Or maybe it's because Mario Party has the old school idea of fun gameplay: simple gameplay coupled with somewhat complex rules. I suppose Mario Party has some analogues, like Apples to Apples, other Mario games, or other "complex-yet-simple" games. However, Mario Party seems to do it very well. And fortunately for me and my roommate, Mario Party 7 has co-op gameplay.

One of my chief complaints of games like Mario Party is the fact that they can take a loooooong time to finish. Fortunately, the co-op mode in Mario Party 7 speeds things up, since you only have to go through one turn per team. So instead of waiting all day for four players to move around the board, you only have to deal with two pairs of people. This alone speeds up the game to the point where you don't have to commit a whole afternoon to the game.

Since you and your teammate are bound together (literally, since you have to move together), you'd figure that the minigames might get boring. Fortunately, you not only play 2 vs. 2 minigames, but also free-for-all games. It's nice, since you get a taste of singleplayer action while still playing a heavily co-op game. Plus, with the free-for-all minigames, you won't drag your partner down if you aren't so good; as long as one of you wins, you get the coins.

However, the best moments in the game came from the 2 vs. 2 games. Part of what makes team-based mini-games is the fact that you really have to work as a team. I mean, even a game like Halo 3, in all it's co-op glory, is not a "team up or die" kind of co-op game. Everyone can do his/her own thing, and everything normally will work out fine. However, in Mario Party, teamwork is essential. However, Mario Party is casual enough where teamwork is not a back-breaker and is just challenging enough to be fun. Whether it's guiding flying bug through a flower field or hauling a battery through a maze, teamwork is key.

The great thing about co-op in Mario Party is that you are pretty much guaranteed to have fun. Even a barely competent team can beat the computer (even if it's set to the easiest difficulty) and still have fun and enjoy a challenge. Plus, the minigames are great, as always. Honestly, the game is perfectly fun just playing the minigames, so it's a win-win situation any time.

I enjoyed my trip to the good old days this week. It reminded me, once again, that casual/non-hardcore gaming is not at all a bad thing. Plus, a trip down memory lane is always great. My roommate began briefing me on the game (since the last Mario Party game I played was probably Mario Party 4), but almost immediately it all came back to me, and I needed no more info. So, kids, next time you want to go back to an old game, or maybe a new version of a classic, check it out. You might be surprised.