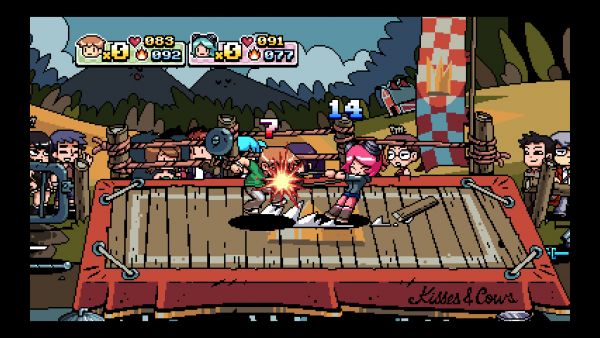 Scott Pilgrim Vs. The World is a fine game, especially for gamers who grew up playing titles like River City Ransom in days of yore.  Even those playing it without nostalgia goggles can appreciate the lovingly crafted art style, amazing soundtrack, and the upgrades system, much deeper than the typical brawler.  To coincide with the November release of the film on Blu-ray and DVD, a DLC pack is being released.  A new character, arena battles, and a dodgeball mode can be yours for the reasonable price of $2.

At the same time, a patch will be released, doing the usual patch-ish stuff like tweaking the difficulty level, and squashing bugs.  However, a very nice co-op friendly feature will be added: drop in/drop out support.  The co-op is still local only, but it's nice to have the flexibility of adding in anyone who drops by your couch and wants to play.  Online play will not be coming at a later date, unfortunately; this is the last patch that Scott Pilgrim will get.