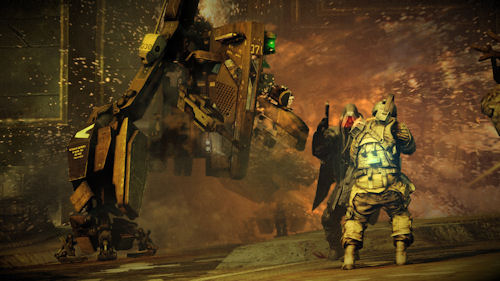 Ahh, Killzone 3.  The on again co-op, off again co-op game coming next year.  Currently we're in the "off again" state - and if the comments by the game's producer Steven Ter Heide are anything to go by - that's the way it's going to stay.  At least we think.

Speaking during a special panel at the Eurogamer Expo this weekend, Heide went on the record to state that "implementing campaign co-op is a lot of work."  We'll agree with that, but we'll also state that the work is well worth it if you can implement it properly.  Ok, so it's hard, and plenty of games have gone on and made a really interesting co-op mode like Firefight, Horde and Survival.  What about these?  Could Killzone 3 see something like that?

I find them [Horde and Firefight] very cool and interesting.  It's not something we've considered for Killzone just yet. We're very happy with the multiplayer offering we have. There's a lot of variety in there. You can play with bots. All the different modes, from Guerrilla Warfare to our Warzone mode, with dynamic mission switching Operations Mode, which is a new game mode.

Ok, so that's right out the window.  So no co-op in Killzone 3 then?  Not definitely.  When pressed further by Eurogamer, asking whether or not we'll be able to play the campaign cooperatively he replied "who knows?"

Mr Heide, I'd venture to say you know - so spill the beans already.