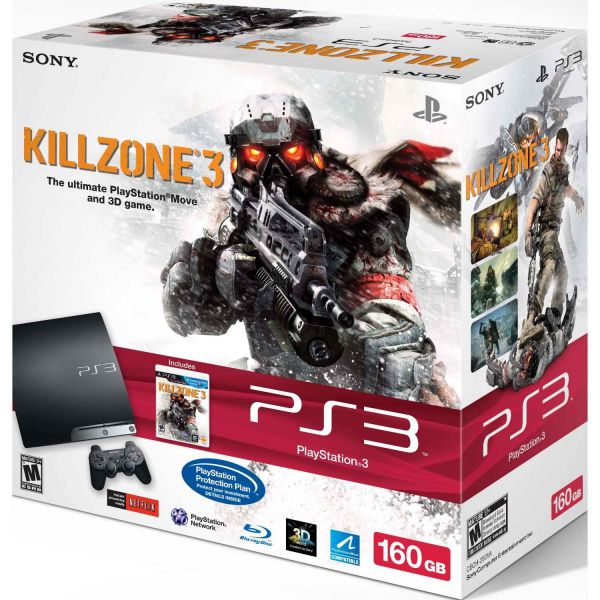 Have you not picked up Sony's big black box yet?  Well, now may be the time to act.  On February 22, the PS3 and Killzone 3 package will be available.  The good folks over at CVG spotted the bundle listed on  Amazon.com, and Sony recently confirmed it.  Here's a little pro tip; if you can find it on Amazon, then it's probably real.  They don't make stuff up for fun. (Unless it's George R. R. Martin's A Dance of Dragons.  That's been listed since 2008, and it is never coming out. Curse you, Zach G.)

The Killzone 3 bundle will include the title game and a 160 GB PS3 for $299.99.  Not a bad deal.  CVG also spotted a listing for a European bundle on Amazon for 348,38 Euros, which I thought was a little pricey, until I realized that commas and decimal points seem to be interchangeable when it comes to Eurpoean currency. Weird.  After hammer-fisting my keyboard around the '4' key and screaming "Amazon, en fransay" I found the listing:

There it is.  It's even got that Pegi 18 number in the lower left hand corner.  I don't know who this Pegi is, but she sure likes putting numbers after her name.  I think it's her rating system; the higher the number, the better the game.  I guess I could Google it, but I'm not gonna.  It also seems like the European version gets 320 GO or GB.  I don't know how gigabytes work out in the exchange rate, but since I'm from the U.S, I'm going to assume it has something to do with the metric system.   Sony hasn't confirmed it's existence yet, but as long as George R. R. Martin keeps his hands off of it, you can expect it to be available in Europe on February 23rd. (Or the 25th, if you live on an island.)