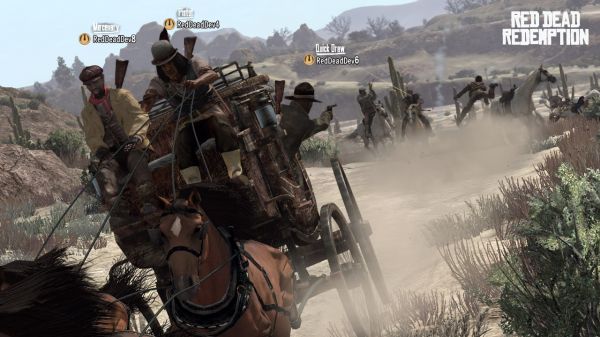 Nick made the mistake of putting two long-winded writers on the same project. The result? Two projects.
Enjoy another recap of one particularly fun evening spent poaching wild boar and causing general mayhem. (See the first one here.)

Following is a paraphrased account of my introductory gaming session with Andrew “Cubninja” Gaskill, via Red Dead Redemption.
Me: “How much have you played thi-- holy cow, you’re a level 44?”
Cubninja: “Oh, yeah, twice over.”
Me: “Well, okay, then. I guess I follow you.” I’ve heard of wilderness guides before...but I’ve never met one that could sniff the breeze and claim, “There’s a Hunting Ground right over here,” without even checking the map. I thought that by suggesting we play Red Dead that I’d be pioneering an adventure, and it turned out that I’d stumbled onto a bona fide Legend of the old west. Andrew is not only a great sport and a pleasantly chatty co-op partner (and flattering, too) - he’s a man after my own heart. We rode together for quite a while, and accomplished several tasks that normally take 30 minutes of discussion just to decide on.

You see, what makes Free Roam a double-edged sword is that it can get monotonous when played alone. I swear, sometimes deciding what to do is like a recurring dream about The Jungle Book's vultures. When two or more cowpokes are willing to stick together, though, the possibilities are endless and overwhelming. This is largely due to the latest DLC pack: Liars & Cheats (check the Battlefield Report tomorrow for detailed impressions). As someone who has been spared the cost of Red Dead’s first two highly priced DLC packs, I was relieved to find that so deep was Andrew’s love for the game that he’d rightfully bought all of the content. It’s not hard to find random people with the DLC...but having someone on your friends list who can join on you for the new Hunting Grounds and Gang Hideouts - or a round of Texas Hold ‘Em poker - is a bit of a struggle.

First we honed our aim with a wild boar hunt. My horse didn’t like getting gored very much, but it was either him or me. A lone griefer did indeed shoot me in the back, and did indeed reap the whirlwind. The griefer left after being taught some manners (though not without broadcasting a whining complaint to the whole Free Roam session); we moved on to a different pasture. Next up we tried our hands at a couple of co-op missions. There’s not much to tell here, except that I got to hear Andrew give his father a quick lesson in gaming. Extra points to Professor Cubninja for pulling out the phrase “magic of the interwebz” on his obviously low-tech dad. Hopefully that wild card made up for the looks of disgust that his wife was giving him for losing fistfights in the mission lobby. Oh, yeah, by the way: don’t start a fistfight if you see both of us together. We make Sonny Liston look like Steven Seagal’s worst contender...and we do it both at the same time. Four Fists of Fury, I tell ya.

Next we fired up a horse race to round out the action. These are straightforward, giving you a medium horse and 12 rounds of ammo (six shotgun shells and six .45 Schofield cartridges). Our first race included a third player, who won, then we jumped into a private match so we could compete a little. Races are held three or four in a row for a full Grand Prix, and they can get a little intense. It’s a neat distraction. Competitive spirits satiated, we killed off our last fifteen minutes tearing Armadillo a new butthole. We had a nice discussion about the different control schemes in between sniping sheriff’s deputies and throwing lit dynamite into the saloon. All in all we had a great time and played off of each other’s strengths and weaknesses. When beating up griefers and AI gang members got too easy, we were able to break up the action with a friendly horse race. Next time, though, we’re squeezing in a game of poker, and I’m taking all of Andrew’s money. I could use a new shirt - mine has a few holes in the back.