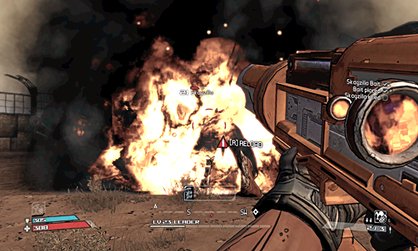 The eagerly awaited free Borderlands patch is going through final approval right now, and it should be up in November.  Gearbox Software is having a giant fall season, including the release of Claptrap's New Robot Revolution, the Borderlands Game of the Year Edition, huge sales on their DLC, Duke Nukem Forever news, and a co-op night with us.

That means that all Borderlands players will now be able to achieve a new maximum level of 58.

Owners of The Secret Armory of General Knoxx can achieve an increase to a maximum level of 69.

That means that if you’ve completed everything, you can play through the game again and again at a challenging level in order to find better and better loot.

Item drops (with the exception of COM Decks) will also scale with higher level enemies to the new level cap.

That means that this Title Update features the highest level weapons to date.

Other fixes, including DLC4 Achievement/Trophy glitches that have affected some users will be corrected to properly award players for obtaining these achievements no matter which order they were completed in.

I was critical of Claptrap's New Robot Revolution when it came out at the end of September.  My main criticisms came from the fact that I was a level 61 Berserker and I could (and did) simply stomp through the game.  This new update should remedy nearly all of my misgivings with CNRR.  And let's not forget to mention that this new patch is FREE.  That's 8 new levels of cap space on top of a whole new level of difficulty for the entire game, along with a higher level of loot drops.  All for the price of nada, zip, nothing.  I'm sure those of you who finished CNRR will be paying a visit to a certain loot hunter-friendly area as soon as the patch hits.  Expect to be making your farming runs this November.