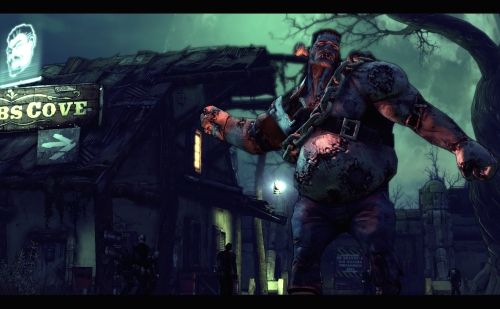 Gearbox and 2K Games have announced a release date and price for the Xbox 360 and PlayStation 3 version of the first Borderlands downloadable content pack called The Island of Dr. Ned.

The DLC is actually an island filled with zombies after Dr. Ned unintentionally converted the entire workforce population to the walking dead.  As you can see from the DLC offers the same slick visual style with it's own unique twist.  You know what kills zombies?  Shotguns.  You know what kills them better?  Shotguns with scopes, electrical damage, and a 10 round clip.

on the PlayStation 3 and Xbox 360 respectively.  There's no word on when the PC would get the content.