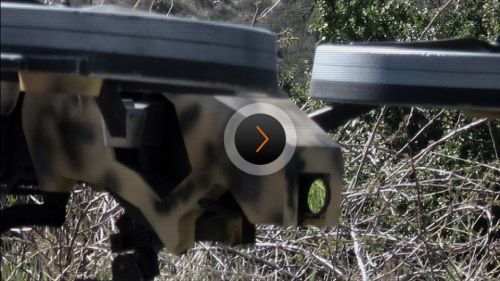 The upcoming Call of Duty sequel, scheduled to be officially announced on May 1 and is most likely going to be the next Black Ops game, might be featuring in a near-future setting instead of a 1970's-1980's one.

From Activision’s recent teaser image displayed on their Call of Duty.com site, it showcases a portion of a quadrotor RC attack drone used for ambushes and aerial reconaissance. What’s more interesting is the image actually links itself to a brand new episode of popular gun enthusiast show on Youtube, FPS Russia, which features the drone in full action. The machine itself boasts a submachine gun with a 100-round magazine and is controlled with a touch tablet, allowing the drone to hover around and give a soldier a sky view of the area/blow a bad guy's brains out. As stated in his show, the FPS Russian talks about his love of the drone, and it’s possible appearance in the next Call of Duty game:

The technology in this baby isn't going to be out there for at least another decade. Looks like the future's going to be fun. But if you can't wait another 15 years my friends are telling me that this baby might just be in the next Call of Duty game, which would be the shit.

Here's the video if you don't keep up with his Channel (any Call of Duty fan should though):

Currently, there is a follow-up being conducted to get some more solid details about Treyarch and their supposed Black Ops title, but only time will tell. It is rumored that the title will set to be released around the normal launch date for Call of Duty games of November 13th, usually being the 2nd week of the month on a Tuesday. Still, people will keep speculating. Apparently, Activision tried it’s best to remove a lengthy list of Black Ops 2 multiplayer information from the official Call of Duty forums, but more unofficial multiplayer details surfaced as of yesterday. Hopefully by May things will finally be settled once and for all.