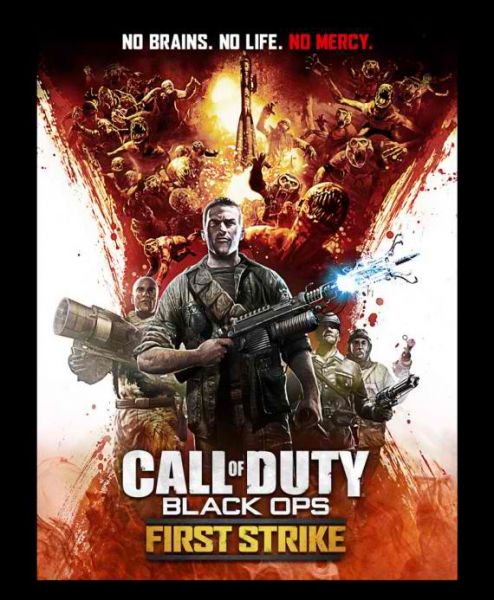 I have to be honest.  I haven't played much Call of Duty: Black Ops since the Co-Optimus co-op night at the end of last year. After our co-op night I had a good handle on the Zombie mode.  By then I had thoroughly enjoyed playing the Combat Training with my wife, and I hit the mid-40 level on the competitive multiplayer mode.  I felt my time with the game had run its course.

This week I had an opportunity to dive back into Black Ops with the new map pack, 'First Strike'.  Not only would there be four new multiplayer maps ripe for co-op comp-stomping, there would also be a new Zombie level as well.  I put the maps through their paces and got my butt handed to me by evil monkeys, and now I can let you know if the 'First Strike' map pack is worth your 15 bucks. "Fifteen what? Dollars? Screw you, Jerry!"

I have Black Ops set to the Multiplayer menu by default upon start-up.  At the mere sound of the music my wife popped out of the office and slammed a battery pack into her controller like it was a gun magazine.  I would have no problem finding a co-op partner for 'First Strike.'

All of the maps are classified as Medium sized.   When you select 'Change Map' in the Combat Training menu another tab is available, simply called 'DLC Maps'.  Read whatever you want into that (More maps to come? Probably).  The four maps and the Zombie level work exactly the same as the other maps in the game, so yes, you can play split-screen with online support in Multiplayer, Combat Training, and Zombies.

We tackled each map in the order they were presented.  The first was 'Berlin Wall.'  It has a 'no man's land' running down the center of it.  There are safe pathways through the kill zone around the perimeter of the map and a narrow path through the center. If you step into the 'no man's land' area, a siren sounds and automatic turrets will rip you to shreds.  I tested it.  I was indeed, shredded.  It's an environmental hazard that's easy to avoid, but adds a nice touch. 'Discovery' is another damn snow map.  I hate snow maps.  (The battle of Hoth was cool.  Once.  Now stop having snow battles in games or movies unless you're bringing something to the table that can trump a robot dinosaur.  You can't.  Unless it's some sort of space tank.  But I digress.)  The center of 'Discovery' has three bridges almost on top of each other.  I've seen video of the lower rock bridge breaking away under the force of an explosion. I threw a grenade at it and nothing happened, but my aim with grenades is almost as bad as my aim with sub-machine guns, so the bridge was pretty safe.

'Kowloon' is set high in the rooftops and features zip lines.  I fell off a roof.  I said 'wheee' as I took a zip line. You can't shoot when you're using them.  I did land right next to a guy and stab him, so that was pretty cool. The last map was 'Stadium.'  It's set outside a hockey rink.  I was pretty upset when I realized I couldn't go on the ice, so I shot the first guy that had a red name above his head.  It worked out well for me and my AI team.

All four of the maps had some level of verticality.  I know some gamers thought that original Black Ops maps offered very little in the way of sniping opportunities.  There seems to be some pretty good camping spots in 'Berlin Wall' and 'Discovery.'  If you're lame.  I'm sure there are many idiosyncrasies for each map to be discovered by the finely tuned CoD expert.  I generally like to run into high traffic areas with guns blazing.  True, I'm usually reloading by the time I actually see someone, but at least I make a lot of noise. The Zombie map is titled 'Ascension.'  It starts of in black and white and the zombies look pretty darn cool without color.  Half the fun of Zombie mode is the exploration, so I don't want to ruin anything for you.  There is a cosmonaut theme at play.  And monkeys.  You'll hate those monkeys.  I will say that there is a giant centrifuge at the beginning of the level that will splat your face if it runs into you.  There are also some new weapons and perks to play with.

As of this writing, there are about a million people playing Call of Duty: Black Ops on the Xbox 360.  Much of this traffic could be attributed to the double experience weekend happening right now on Xbox LIVE. (These numbers are according to the lobby playlists at around 5pm PST, 2/4/2011.)  634,000 of them are playing the regular multiplayer. 85,000 of those people are in the 'First Strike only' playlists.  Shockingly, 300,000 people are playing the Zombie mode.  78,000 of them are playing 'Ascension.'  So you shouldn't feel left out if you haven't bought the 'First Strike' pack yet.

Is the 'First Strike' map pack worth the fifteen dollars? If you love Black Ops multiplayer and Zombies, it sure is. Consider it a new coat of paint, plus 150 Achievement points from the new Zombie map.  But if you've had your fill of multiplayer, or Zombies just isn't your thing, you'll find little here to add to your gaming experience.

Call of Duty: Black Ops 'First Strike' is available now for the Xbox 360.  The price is 1200 Microsoft points, which equals fifteen dollars.  'First Strike' is expected to be released on the PlayStation 3 and the PC in the near future.