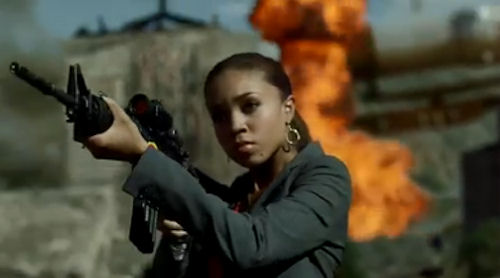 Round two of the battle between the biggest game titles featuring a grammatical colon kicks off November 9th with the release of Call of Duty: Black Ops.  Round one was easily won by Halo: Reach, which was probably due to the fact that it came out a month and a half ago.  Be prepared to see so many commercials for Activision's military shooter that you'll think its running for office.

This latest spot is titled,  "There's a Soldier in All of Us."  It features more "Gimme Shelter", more celebs, and more explosions.  I think if COD: Black Ops was running a political campaign, it would be based out of a red state.  What do you think?