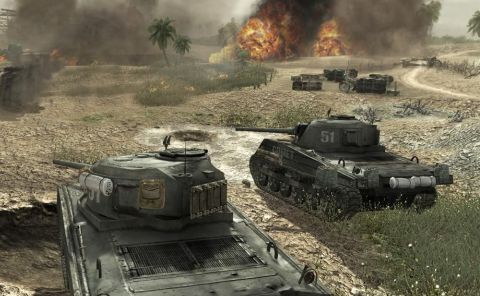 Slowly but surely, I'm finding a nice comfortable niche here at Co-optimus...and if anyone's noticed, I'm somewhat of a Call of Duty World at War advocate. Call me a "fanboy", though, and in your honor I'll start posting videos of me playing Wii Fit...not a pretty sight.

In a sidestep from our last World at War co-op news post, this Xbox 360- and Playstation 3-version update comes from a helpful tip that points us to GamePlayer, an Australian site that scored an in-depth preview last Friday, and blogger Chris Stead seem to have a lot of positive things to say:

Co-op was definitely part of Infinity Ward’s vision for their Call of Duty 4 engine, but rather than refine it themselves for a DLC release, they’ve passed on the challenge to developer Treyarch. Treyarch, using the CoD4 engine, will deliver four-player co-op in this Christmas’ Call of Duty: World at War. We’ve just been bashing about in this very mode, and we’re here to tell you it’s just as good as we hoped it would be.

Hit the jump for some more choice quotes.

We’d even go as far as to say it does a better job than CoD4 at brining [sic] the war to life – some call we know, but Treyarch aren’t taking a backwards step in taking Infinity Ward’s engine forward.

Wow, that is some claim! Any negatives?

The graphics...while impressive, aren’t as good as CoD4. Both games may use the same engine, but very few assets were able to transcend from modern day to the forties and the attention to detail, as well as the sharpness of the A.I – where Infinity Ward’s talent really shines – aren’t as impressive. At least in the build we saw.

In wrapping up, Chris toned down the optimism with which he opened the article, but he still seems pretty impressed...

Certainly in the last two years Treyarch has come along way to bridging the gap between themselves and the mighty Infinity Ward. Clearly they still remain in separate classes, but that is the nature of talent, isn’t it? There can only be one Gold Medal winner. Thankfully, Silver ain’t bad either.

Sure, you could say that my blood is rushing too fast past my brain -- specifically, the area that regulates fanaticism and provides at least some degree of cynic logic -- but the fact is that if Treyarch really can provide a high-bar game with worthy co-op gameplay, then we are the ones who ultimately benefit.

So am I already a sucker for World at War hype? I suppose we'll find out November 11th!