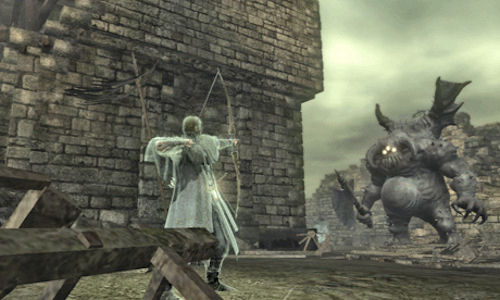 Demon's Souls was one of those games with a really unique co-op premise.  Instead of traditional forms of co-op, players could be randomly assisted by other players that have died in their own game.  Not only did the Atlus game go on to receive great reviews, it went on to sell well enough to earn a Greatest Hits release on the PlayStation 3 - something the publisher rarely sees for its niche titles.  So with good sales, should come a sequel, no?

Guardian.co.uk: Will there be a sequel?!

Hidetaka Miyazak: I will let Mr Kaiji answer that question.

Takeshi Kajii: At the moment, my answer is "no sequel!" However, we have been encouraged by all the players, and this title is so well supported, and besides we like this title so much… Well, this is my own feeling, but I think one day we could bring you another Demon's Souls...

But all isn't lost.  If you've followed Atlus news lately, specifically during the Tokyo Game Show, you'll know the team at FromSoftware are actually hard at work on a PS3 and 360 game called Project Dark.  While not a true sequel to Demon's Souls (which in itself was not a true sequel to Kings Field) - we wouldn't be surprised to see the game borrow a lot of the concepts...which we hope means expanded co-op!