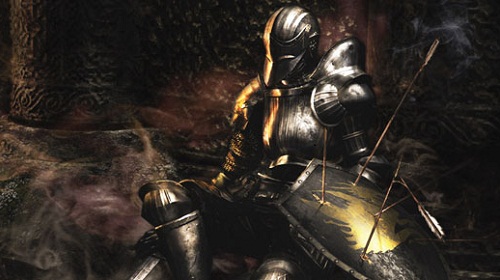 Bad news, lost souls of Boletaria! Demon's Souls servers are going offline forever next month. Atlus has announced a server shutdown before, but I think they really mean it this time. If you decide to fire up your copy of Demon's Souls you'll be greeted with the following message:

At the end of May 31st, 2012, the Demon's Souls online servers will shut down forever.

We will let members of our ATLUS Faithful mailing list (www.atlus.com/faithful) vote on what the World Tendencies should shift to, once for May 1-15, and again for May 16-31. We invite all users to log in on May 31st to join us in celebrating and remembering.

Thank you to all of you, you brave adventurers of Boletaria, for your messages, your bloodstains, your alliances, your invasions. you made Demon's Souls the amazing online experience it was.

We are honored to have been a part of it, and we are forever grateful for your passion, dedication, and support.

I played last night and noticed that something was definitely up with the World Tendencies. (For the uninitiated, the World Tendencies come in shades of white and black, the lighter the shade, the easier the world. They're affected by the success and failures of the online community.) Almost every enemy dropped three health items, and the notoriously difficult game felt more like an action title than a punishing dark fantasy adventure. I've played in Pure White World Tendencies before, but the game never felt this easy. Maybe all my Dark Souls play time has finally paid off...

The Demon's Souls community must know their time is short. The opening stage and the hub world Nexus seemed incredibly crowded,  wandering apparitions and blood stains from fallen players were everywhere. I just started up a new character, so I haven't been into the summoning areas yet. I have a feeling the maps will be littered with summon signs. I also believe that invasions will be frequent and vicious.

On October 6, 2009, North American gamers’ expectations of what an online roleplaying experience could be were forever changed.  With Demon’s Souls, gamers received a title of breathtaking scope and vision, a project built on experimental cooperative and competitive multiplayer concepts, offering users both direct and indirect methods of communication and interaction.  Elements of every connected player’s single player world carried into the worlds of others, sometimes as nothing more than an echo or afterimage, and other times in the form of an alliance or invasion.  With countless hazards to memorize and plan for spread across each of the game’s sprawling dozen-plus worlds, the ability for players to leave hints—or, potentially, deceptions—and to view the final moments of other adventurers’ lives, created an unprecedented form of RPG crowd-sourcing that remains revolutionary to this day.

When subtle interactions were insufficient assistance, players could call across dimensions for assistance, pulling the weakened spirit forms of other adventurers—unable to communicate using conventional voice chat in order to preserve the game’s intense atmosphere—into their worlds to help them defeat the game’s unforgettable boss monsters.  Other less altruistic spirit form users could invade the world of living adventurers and try to revive themselves by quite literally stealing that life from another.  All of these online elements, all of the ways in which gamers would interact with each other, served to enhance and complement the core game and were designed so as to neither diminish nor distract from the experience and thrill of simply playing the game.

It has been a tremendous honor and privilege for all of our staff at ATLUS to have been involved with so innovative and groundbreaking an interactive entertainment experience.  We poured our heart and soul into every facet of our involvement with Demon’s Souls, particularly the title’s memorable Deluxe Edition, which served as the only avenue through which to purchase the game’s official strategy guide.  It was also of the utmost importance for us to sustain the game’s online experience as long as possible, even beyond the point at which sales could help to offset the expense.  Regrettably, the online servers cannot be sustained forever and now the end draws near.

Thank you to the unparalleled passion and support of the Demon’s Souls community throughout these last two and a half years.  The online adventure may end soon, but the memory of it—just like that of every boss strategy, every level floor plan, and hidden secret—lives on in the gamers for whom the game was so special.

Yeah, it's pretty much an ad for the game, but I think fans will appreciate it.

Demon's Souls is available right now, exclusively fro the PlayStation 3. You have until 11:59 pm, PST on  May 31st to play the game cooperatively (or competitively) online. Once the servers shut down, Demon's Souls will forever be a single player experience.

Do yourself a favor, and pick up the game before it's too late.  I believe it's one of the best titles of this generation, despite the average co-op score it earned in our Co-Op Review. Here, I'll even help you out. Here's a handy link you can use to not only buy the game, you'll also be supporting Co-Opitmus!

If you do pick up Demon's Souls, look for my summon sign. I'll be online until they kick me off.