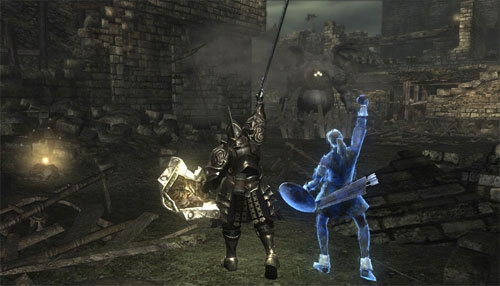 If  you caught Nick's most recent This Week in Co-Op article, you may have noticed that we were given an "assignment."  He asked us to leave the protective warmth of the Co-Optimus womb and play with the general public.  As someone who has gone to great lengths to avoid the general public, I was outraged.  I sent a few IMs to Nick asking him why he hated the staff (or more specifically, me).  Alas, my instant messages fell on deaf ears- or blind eyes; or maybe he just wasn't online.  Either way, the die was cast, the assignment was set in digital stone.  The only thing to do now was to choose a game and play.  I suddenly felt like Ray Stantz squaring off against Gozer.  Anything worth doing is worth doing ridiculously, so I chose Demon's Souls.

If you've been following me on Twitter (if not, why aren't you?), you know that I recently acquired a copy of Demon's Souls, and by recently, I mean six days ago.  I'm a little late to the PlayStation 3 party, but hey, at least I showed up.  Obviously, I haven't been grinding away at DS since its release in 2009, unlike everyone else who still plays the game.  I knew a handful of things before I started it up.  1) The game has co-op, but it's weird.  2) There is no voice chat. 3) Demon's Souls is incredibly difficult.  So difficult, in fact,  that a large number of reviewers simply gave it a great score and then ran away screaming, hoping the disk wouldn't sprout legs and come after  them.  With these three tidbits of information I created a character and dove in.

And by dove in, I mean I took a few days to get used to the mechanics before I dared make an attempt to play online.  Demon's Souls is very unforgiving, but not impossible.  After I was comfortable with my abilities I chose to throw down my Blue Soul Stone and help someone out with their quest.  Co-op play is a little different in Demon's Souls.  Your character has two states of being.  You can either be in "body form" or "soul form."  If you are in "body form" you have a full health bar.  You can summon up to two other players into your game.  Joining players must be in "soul form."  Players who are in "soul form" have only half of their health bar.  Why would you choose to play in "soul form?" Because Black Phantoms suck, that's why.

If you are in "body form," your game can be invaded by other players, called Black Phantoms.  They invade other player's games to do one thing and one thing only, kill the human players.  The mix of PVE and PVP gameplay makes Demon's Souls a hybrid of competitive and co-operative gameplay.  There is so much more to the game, but I had better get to my actual co-op experience or this is going to be the longest TWIC, ever.

As I said before, I felt I had sufficiently acclimated myself the the mechanics of Demon's Souls.  I had been playing in "soul form," which spared me from Black Phantom invasions.  After defeating the first boss, I gained the ability to place Blue Soul Stones.  These act as a beacon to other players.  Simply place your stone and wait to be summoned by a player who is in "body form".  Or you can run around killing up everything while you wait, which is what I attempted to do.  After a few minutes the game told me I was being summoned.  I was so excited!

I joined a player named "U-something or other."  His name was really long, and my notebook was waaay over on the other side of the couch.  I'll just call him "U."  He immediately greeted me with a bow.  I went scrambling for the instruction booklet, trying to figure out how to do gestures.  He must have taken my spastic movements as a sign that I meant business, because he immediately charged at our enemies.  I can only describe the results with this image: Picture a cow jumping over a barbed wire fence.  Udder Destruction.  He killified everything.  Quickly.  Demon's Souls has a fancy formula to make sure joining or invading players are all near the same level, but this guy was much more skilled than I.  Level had nothing to do with it.  The best part?  I was getting souls (XP) from all his vanquished foes.

And then it happened.  Black Phantom "Whatshisname" had invaded the game.  To my horror, my host player stopped moving.  He just stood in the doorway of a guard tower, like a statue.  I moved all around the area, trying to see where our attacker would come from.  I quickly dodged a blast of dragon fire.  Did I forget to mention the dragon?  Oh yeah, there was a dragon strafing the castle wall were perched upon.  We had to sprint from guard tower to guard tower to avoid being cremated. "What are you doing?  Are we running?  Are we fighting?  Why won't you answer me?  What's the plan?" I screamed at "U."  No response.  There is no voice chat in Demon's Souls.

He came.  Like something from a nightmare, the Black Phantom radiated an aura of pure red hatred.  This was the digital embodiment of a griefer in its purest form.  A Black Phantom's sole purpose is to invade your game, kill you, and to take your souls for himself .  He appeared, sprinting around the edge of a charred wagon.  It was then that I noticed my host was standing with his shield at the ready.  I mimicked him.  The Black Phantom closed the distance quickly.  I tried to lock on, readying my Spear (Plus 1) for the inevitable clash of bodies and metal, of good and evil.  I strafed to my left while "U" stood stoically to the right, unflinching.  The Black Phantom was upon us.

He never slowed down.  He didn't pause.  He didn't even seem to notice us.  He ran through the guard tower, right up the walkway, fearless of the dragon's flame.  It was then that I remembered something else about Demon's Souls.  Regular enemies don't attack Black Phantoms.  He wasn't running from us.  He was surrounding himself with allies.  Since I had already been to this part of the level several times, I knew what awaited us.  Blue Eyed Knights and a mess of Crossbowmen.  The reason I had been here many times before is because the Blue Eyed Knights kept killing me.  Great.  Now we have a Black Phantom in our game, and he just got himself two bad-ass buddies.  I looked to "U" for a bit of guidance, and found that  he was already charging up the stone walkway.  I tried to follow, but the warning shriek of the dive-bombing dragon pushed me back into cover.   Flames thundered all around me. You've got a little something in your teeth...

It was go time.

I righted myself.  I switched to my Broad Sword (Plus Two).  I added Turpentine to the blade, which set it on fire, increasing the damage.  Plus, it looks super cool.  The dragon screamed through the air, raining down a fiery apocalypse.  I sprinted after the flames, timing my run perfectly.  When I arrived at the higher castle gates I found chaos.  One Blue Eyed Knight was down, as well as a Crossbowman.  I fell upon the two remaining artillery men with my flaming sword of ass-kickery, chopping their life bars away.  There was pandemonium at the portcullis.  "U" was holding the Black Phantom at bay while simultaneously trading steel with the Blue Eyed Knight.  The three of them were circling each other.  Spell effects I had never seen before were flying back and forth between "U" and the Black Phantom.  The Blue Eyed Knight menaced with his sword and shield.  A purple cloud of nastiness seemed to arise from the castle floor itself.  The Black Phantom momentarily retreated, and I saw my chance.  I jumped into battle and stabbed the Blue Eyed Knight when his back was to me, killing him.  It may have been cowardly, but screw it, I'm new.

"U" ran down the hallway in pursuit of the Black Phantom.  As they battled, I had witnessed both players healing themselves often.  I followed suit and downed some Half Moon Grass to replenish my life.  I had been wounded at some point during the fray, but I don't know when it happened.  Then I saw him.

The Black Phantom stood alone before me, framed by the yawning stone opening of the castle wall.  My burning blade had suddenly grown dark.  I quickly switched to my spear, to try and keep him at a distance.  "U" was nowhere to be seen.  The Black Phantom moved quickly.  Raising my shield, I struck out with my spear.  The Black Phantom rolled like a frickin' ninja and hit me with something.  I didn't really see it.  My Stamina and Health bars deflated as if they were pricked balloons.  I had a shred of Health left.  I threw my body backward, rolling clumsily in my heavy armor that had proven worthless when dealing with this superior foe.  I stood up slowly, my stamina drained.  There was no escape.  The Black Phantom closed for the kill...

And then he got KTFO!  "U" charged down the ruined corridor.  He stabbed the Black Phantom twice, brutally.  A message appeared, saying that the "Black Phantom Who Broke into the Wrong G.D. Rec Room was Slain."  There was much rejoicing.  "U" did the "Hurrah" gesture. I tried to thank him, but instead I moved a little to the right.  I think he knew what I was trying to say. That giant shield was the last thing that went through my mind on numerous occasions.

We moved on to the boss.  "U" brutalized the Tower Knight.  It was a total beat down.  I killed some archers, and I tried to attack the Knight when he was going down.  He kind of fell on me, doing massive damage in the process.  I hid for the rest of the fight.

Once a boss is defeated, the co-op session is over.  Little did I know, you can grade your co-op partner at the end of the battle.  You are given a scorecard where you rate other players with an E, D, C, B, A, or S.  You are awarded souls from the defeated boss based on the grade other players give you.  Gulp.  I wanted to say;

"Hey 'U,' remember, that one time, when you had the battle well in hand, and I stabbed that Blue Eyed Knight anyway?  Yeah, I risked life and limb for you buddy.  Oh, and thanks for saving my butt back there, and doing all the work, and pretty much being awesome."  But I couldn't do that, because Demon's Souls doesn't have voice chat.  So I gave him an "S," the highest score possible.

Suddenly I was whisked away to my own word.  As a reward for defeating a boss, or at least being near someone when they killed a boss, I was given my body back.  Now I was in "body form."  I also received a crap-ton of souls.  I checked my multiplayer record and saw that "U" had given me an "S" rating.  How cool is that?  I then did what any new player should do.  I returned to the hub world and spent all of my souls on leveling up and upgrading weapons.  Then I threw myself off a cliff.  I do not have the skills for "body form."  I'll stay a phantom for now, thank you very much.  And thank you, "U," wherever you are.  (I'm guessing Japan.)