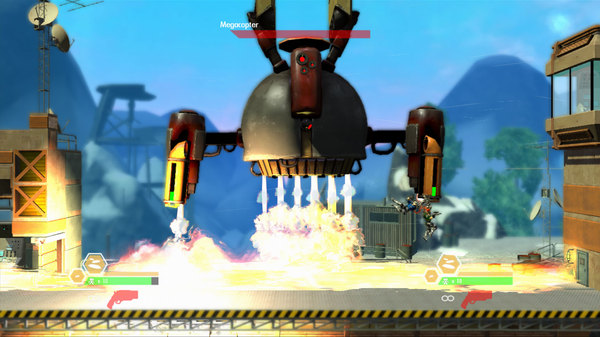 A few months ago we brought your attention to the disservice that Capcom was doing to fans of their Bionic Commando franchise by implementing a 'jump' button.  Like crying in baseball, it just doesn't belong.  Well, Hallelujah!  A 'Retro Mode' has been announced for Bionic Commando: Rearmed 2, eliminating that pesky ability.  This mode will be unlockable, but I think stubborn faithful gamers like myself can simply refuse to use the jump button on the first playthrough.  Let's hope there's not one lone barrel all by itself in the first level, because then I'd be screwed.

You may remember the new bionic characters we introduced a week or so ago.  Speculation leads us to believe that these characters will be playable in co-op.  You just don't outfit folks with bionic appendages for no reason.  Today we get a look at some more characters including: Super Joe, a guy who looks exactly like Dwayne "Don't call me 'The Rock'" Johnson, the main bad guy, and a sweet video of a fight with a MegaCopter.  Is there any other kind?

Oh!  Sorry to bother you, sir.  We were just doing a piece on Bionic Commando's patriarchal figure, Super Joe, and-Gah!  Seriously?  This is Super Joe?  What did they do to him?  More like Assistant Vice Principal Joe.  Sweet 'stache, though.

As one of the fathers of the bionic program and key figure in the defeat of the Imperials, Super Joe is the the accomplished director of TASC Force operations. He will personally oversee the Papagaya operation.

Did I tell ya or did I tell ya?  This is supposedly Sergeant Dean Wilcox, but come on, that's the frickin' Rock.  Apparently he has a bad case of finger-gunitis.  Do you know how many 'clean' jokes I have for a guy with his fingers held like that and six giant suppositories strapped to his body?  Just one.  And that was it.

Dean Wilcox was born in Billings, Montana and joined the FSA Army at the tender age of 18. By 24 he proved himself in action and sustained critical wounds warranting him a spot on the TASC Force bionic program.

Here is General Vicente Sabio.  He's your standard dictator-for-life despot.  I wonder if his head will blow up real good in the end, like Hitler's.  No spoiler warning for a game that game out in 1987!

General Sabio has risen to absolute power on the Island of Papagaya. Not your typical military man, Sabio is a genius scientist in the field of robotics and a master of Machiavellian politics.

Oooooh!  Machiavellian!  That must be smart-speak for MEGACOPTER to the FACE!

Bionic Commando: Rearmed 2 does not have a release date yet, but you should expect it early next year for Xbox Live Arcade and the PlayStation Network.