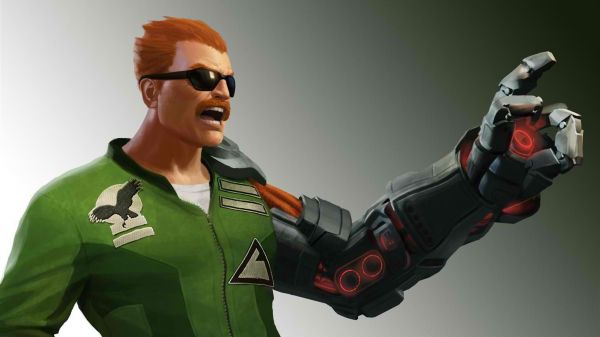 The sequel to the reboot of the Capcom classic, Bionic Commando, is due out this week. The original game was best known for its bionic form of locomotion and unforgiving difficulty.   Bionic Commando: Rearmed 2 launches today on the PlayStation Network, though as of this writing, it's not up on the PSN Store. It is scheduled to hit the Xbox LIVE Arcade tomorrow.  Whichever Marketplace, Store, or flea market gets the game up first will receive my fifteen bucks (or 1200 Microsoft points). Two players can co-op locally as Nathan "Rad" Spencer.

The new trailer has everything, as long as your definition of "everything" is 8 bit music, the word "rad," and a giant robot. After fixing the blasphemous jump issue, the only disappointing aspect of this game is the title.  I was hoping they would call it "Bionic Commando: Re-Rearmed 2: The Mustache Boogaloo."  Dare to dream.