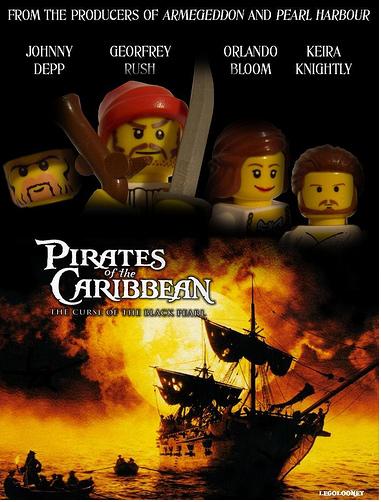 Ahoy there, me hearties.  Bottle of Rum.  Splice the mainbrace.

If you enjoyed this random selection of Pirate sayings then the latest LEGO game from TT Games' bucket 'o' bits, may just wet your appetite.  LEGO Pirates of the Caribbean is coming to 360, PC, PS3, Wii, DS, Virtual Boy, Amstrad Mega PC, and all other consoles throughout history this May.

Why May you ask?  The game is released alongside the 4th (and let us all hope final) Pirates film.  The game will contain the usual 2 player japery of the LEGO games, but with added plundering and no small amount of swashbuckling.  Films one to three will provide the structure for the game, as well as added elements from the 4th.  I'm hoping this means that the game will have four hub areas that provide LEGO based highlights from the films; rather than the game getting progressively worse as it goes on ....

Over the past few years the LEGO franchise has provided Co-Optimus with a lot of joy.  We even put the games up against one another and found the King of the LEGO games, but who won?  Needless to say with LEGO Star Wars 3: The Clone Wars, LEGO Harry Potter: Years 5 to 7b, and now LEGO Pirates of the Caribbean announced, the competition will have to retaken and perhaps one of the new boys can win gold (treasure)?