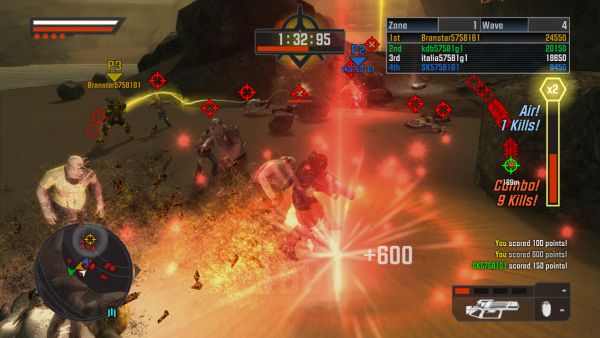 When Crackdown 2 was originally announced to have an 8 player co-op survival mode, we were ecstatic.  When we found out the feature had been cut from the game...we were saddened.  But the mode has returned, though slightly different, and only supporting four players - it's called Deluge - and its the latest piece of DLC for Crackdown 2.

When you get the Deluge content, you'll be greeted with a new menu option on Crackdown 2 to enter the mode.  You can choose to join a game or host a new one, and if you host, you can leave the game open to the internet or make it a friends only affair.  The nice thing about Deluge is its fully drop-in and drop-out capable, so even when playing by yourself a fellow agent can drop right into the action and help you out.

There's only three "maps" available in Deluge, though these areas are large sub-sections of the city much larger than the multiplayer versus environments.  There's also three difficulty levels available, adding some replayability to your game. Deluge uses a few different dynamics to keep you on your toes.  For one, you are constantly racing against the clock, only able to extend your timer by clearing a wave of enemies.  The second is by moving the waves of enemies to different areas of the city, after clearing the wave you're given a jump pad (or set of jump pads) to get you to the next target quickly - though it may not necessarily be the quickest way to get there.  Finally the waves are a mix up of four different things: standard enemies, freaks, strongholds, and capture points.

For the first two wave types you'll basically just be clearing out whatever red targets are on your screen.  For strongholds, you'll have enemies entrenched in an area with a higher value target mixed, and finally for capture points you need to stay within a capture zone for a set period of time.

Obviously each successive wave gets increasingly more difficult adding to the challenge.  But it's not just about the challenge, its also about the points.

There's a combo system at play that allows you to chain together different types of kills to earn maximum bonus points.  Blow up 20 guys with a grenade and you'll earn a bonus.  Kill 10 guys while flying with the jump jets and you'll earn a bonus.  On top of this is an increasing combo meter which continually ticks up the longer you survive.  When you combine these score element with the big over the top number graphics you get something that feels a lot like an arcade game, and a mode that almost feels similar to the Mad Moxxi DLC for Borderlands.

Deluge is a fun add-on pack while playing, but there are some problems inherent in its design.  The scoring system, while addictive, offers no leaderboards or tracking of any sort.  There's also a constant reminder about Windows Phone 7 and its Crackdown based game that is available on the platform - in fact - owning it unlocks additional content in Deluge like the ability to use Helicopters and an Achievement.  Thankfully that ability and achievement are viral, you just need to play with someone who has it to get it, but it's still an annoyance.  Finally while most enemy areas are large packs of guys fairly easy on mowing down, sometimes you'll find enemies hiding in hard to reach or see places - combine with the time element - becomes an exercise in frustration.

For $7 Deluge might not be for everyone but the hardcore Crackdown 2 fans.  I certainly had a lot of fun in co-op with it but still felt like something was missing.