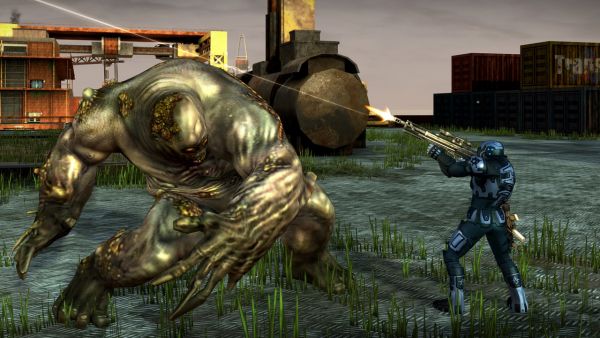 Last week we posted a news story that offered a few new screenshots for Crackdown 2 as well as details regarding the pre-order bonus.  We also initially stated that the release date for this anticipated co-op title would be June, but then updated the post that further details were pending.  Well all of the facts are now in and it seems, sadly, that Crackdown 2 still has no firm release date other than "later this year."

Microsoft originally gave the June release date for Crackdown 2 in their response to the January NPD sales, which VG247.com reported on last week.  That June date, though, was retracted the following day in an e-mail Microsoft sent out in which they stated:

Today you received an email on Xbox 360’s January NPD results, and we’d like to make a clarification.

We have not announced a launch date for “Crackdown 2″ and the time frame listed in the mail was incorrect. Please look for an announcement on this title at a later date.

Apologies for any confusion this may have caused.

So, the date given in the initial response wasn't accurate, and June was nixed as the release date for Crackdown 2 and that should have been the end of the story.  However, on Monday, Videogamer.com reported that the XBox.com page for the game had a June 11, 2010 release date for the game, which was a more specific, yet unlikely (it's a Friday), date for the game.  Hope briefly glimmered once more, and VG247.com got a hold of Microsoft to get the final word regarding whether or not we would be tearing up Pacific City with our friends in the summertime.

The result?  Unfortunately, the Microsoft rep they talked with stated, "I can confirm the article is incorrect and the game is schedule for 'later this year'."  Too bad as we were really hoping that we would be able to get our hands on that demo that was promised some time in the next couple of months.  So until an actual release date for the game and demo are given, we'll just have to enjoy as much of the first Crackdown as we can.