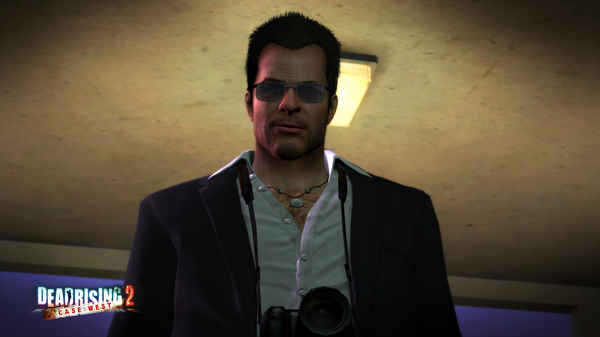 Frank West is back, baby!  The protagonist from the first Dead Rising will return in Dead Rising 2: Case West.  Great, now we have a photographer who can record all the hot duct-tape-on-zombie action for science.  Frank West and Chuck Greene will team up in the epically episodic epilogue to Dead Rising 2.  Online co-op will be supported.

...kicking all sorts of zombie butt at the Phenotrans Facility outside of Fortune City.  For those of you who can't remember what happened in the game, let's just say that Phenotrans is a sort of 'umbrella corporation' that may be responsible for the zombie outbreak.

This episode will have the photography mechanic of Dead Rising and the weapon building of Dead Rising 2.  There are new enemies, and some familiar faces.  And yes, there will be survivors to save.  There will also be new combo cards for weapons like the 'Zap and Shine' and the 'Reaper.'  You can expect Dead Rising 2: Case West to hit Xbox LIVE exclusively next month. Now, now, gentlemen.  If you use conventional weapons, you're missing the point. Zombie head in a jar?  Now you're talking!