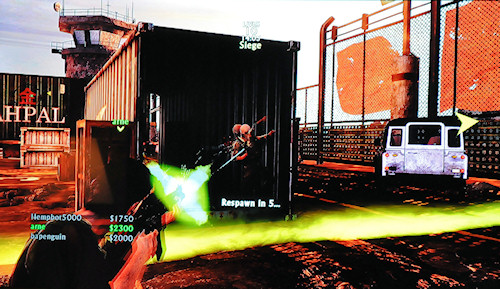 This week we kick off a brand new batch of This Week in Co-Op articles. Over the next two months we’re going to be bringing you a unique spin on our weekly feature, the Co-Opticrew are playing with various members of the gaming industry including developers, PR, journalists and podcasters.

This week I wrapped up the Uncharted 3 beta with Naughty Dog’s Community Manager, Arne Meyer. Arne’s job at Naughty Dog involves community outreach - that means managing the official blog and forums, Twitter, Facebook, and any other social connections involved. You’ll also see Arne posting from time to time on the Official PlayStation Blog. I fired up my PS3 and joined Arne’s Uncharted 3 party only to find he couldn’t hear me. After some mucking around and testing it appears Uncharted 3 didn’t like my microphone, despite the PlayStation 3 self tests working just fine. I shot Arne an IM - "Lets just play."

We jumped into Co-Op Arena on The Chateau, one of the two available maps in the beta. This mode mixes up co-op objectives between three random game types: Survival - Kill all Enemies, Siege - Only points from the target zone, Gold Rush - Capture a treasure and deliver it to a chest. You have twenty minutes to complete as many waves as possible of this.  The more you complete the more points you earn towards your rank and unlocks.

Soon a random person joined our session and we were off and running.  Our person that joined couldn't hear me either, so it was just going to be Arne and the random talking with me listening in like some sort of eavesdropper.  Their conversation was light hearted at first, but eventually both seemed to warm up.  After things started to settle in, Arne said something that surprised me - "We should do alright on this map, you’ve got me."

"I work for the developer." said Arne.

I was pretty surprised he ousted himself so quickly. And in retrospect, he probably regretted it. Our co-op partner got a little more chatty then, asking questions about the industry, claiming inside tips about the game, and professing how awesome he is at certain modes.  It wasn't that he was annoying, but it was slightly distracting from our overall objective of killing the waves of baddies.

We did well through most of the modes, but Siege seemed to give us a bit of trouble. Most times the game put us in a tight room on the upper floor of Chateau.  The first issue was actually getting to the room without getting killed - and then actually holding the room which was dark and chaotic was our other problem.

We persevered for the most part, with plenty of revivals going on.  The medic kickback definitely came in handy.  It was tough to call for help without the use of voice chat, so I ended up finding myself getting over run quite a bit. Arne made sure the group knew I was the weakest link in a joking manner - my feelings were only a little hurt - but it motivated me further.  Maybe next time he'll make sure their game has proper working voice chat. After Chateau we hit up the Airport map for the Co-Op Arena again. Our random friend got a little more chatty with Arne - claiming to have seen things in videos for the game that didn’t exist, asking a bit more about Arne’s job, and of course asking about a job for himself. Having the PR background that he has, Arne did a great job of deflecting the questions, and never made a wise-ass comment...like I would have.

Like the previous map, Arne had the inside scoop on some strategy, and we found an ideal location on the roof for the survival waves. We ended up playing through two full rounds on Airport, though our third ended in failure and finally the end of the night.  I almost doubled my online rank in a handful of sessions and earned plenty of cash.

The Uncharted 3 beta was a solid co-op experience for me, with not only the arena matches but also the Adventure mode. Our play session blew by in no time and its easy to see Naughty Dog really polished up the multiplayer experience from Uncharted 2.

Uncharted 3: Drake's Deception is out this November on the PlayStation 3 - and hopefully Arne and I can continue some co-op shenanigans when the time comes...this time with proper chat.